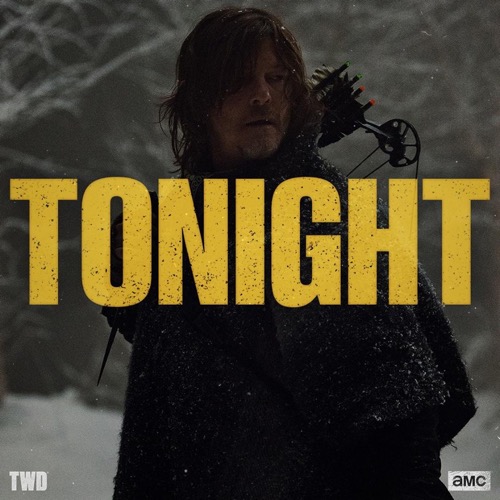 Tonight on AMC our favorite show The Walking Dead airs on an all-new Sunday, March 31, 2019, finale episode and we have your The Walking Dead recap below. On tonight’s The Walking Dead Season 9 episode 16 called, “The Storm,” as per the AMC synopsis, “The communities brave a ferocious blizzard following an overwhelming loss. As one group deals with an enemy from within, another is forced to make a life-or-death decision.”

Ezekiel speaks to someone on the phone. They need help. Too much bad has happened. Pipes have burst, things are breaking, people have died. The rot has spread. Carol looks at a box with Henry’s name on it. Daryl brings Lydia a plate of food. They all pack up to leave The Kingdom together. Snow begins to fall.

On the road, Michonne, who has joined them talks to them about what they think they need to do next. They haven’t heard from Maggie. Alden gives Lydia a hard time when they see walkers. Are they her people. Haven’t they done enough? Daryl tells him to lay off. He talks to Carol who cannot help but see Henry when she sees Lydia. Jerry tells Ezekiel that the temperature is dropping.

Back at Alexandria, it is cold. Snow is falling. They will have to let Negan out. He will freeze to death in his cell.

On the road, Daryl and Carol take out two walkers. Daryl runs to see if they are one of the whisperers. Ezekiel goes to. He asks Daryl what his plans are after they reach Hill Top. He hopes that he and Carol can have a fresh start. Lydia wanders off. She finds a walker frozen in the pond. She kneels down and extends her wrist and closes her eyes, hoping the walker will bite her. She opens her eyes to see Carol who stares at her.

Carol and the others decide to stop off for the night at the closest place – the Sanctuary. Meanwhile, Rosita, Eugene, Gabrielle, and Judith have brought Negan into a house with one of them. He makes jokes about Rosita and her baby daddy. Judith reprimands them. They all smell something just as they try to start the fire. There is a small explosion. The furnace has died. They all need to head to Aaron’s.

At the Sanctuary, they all try to keep warm. Daryl tells Carol that they will make it. Carol admits that she is losing it. She is barely hanging on. Daryl offers to take Lydia and leave. Carol doesn’t want him to.

Michonne and Ezekiel and some of the others look over the maps. They need to get out of Sanctuary. It’s too cold but the only way to make it is to cross through The Whisperers territory across the ice. They only have food for 1 day. If they don’t move now they will die.

Michonne and Ezekiel talk. He blames himself for the Kingdom falling while Michonne admits she was wrong about them all living separately. They would have seen Alpha if they knew one another. They head out to try and make it to the next station. On their way, they come across the pikes that held the heads of their own.

Rosita and the others use a rope to make it to Aaron’s with visibility low. Judith thinks she hears dog who she has lost. She runs off. Negan follows after her.

Daryl and the others make it to the ice where they need to cross after coming across frozen walkers who stand like statues. Michonne chops them down with her knife. The ice looks safe. Just as they start to decide to cross they cant find Lydia. Carol says she will go look for her. Walkers come out from snow bankings around them. Alden, Aaron, and Ezekiel help everyone cross as Michonne and some of the others take out the walkers. Carol finds Lydia. She grabs her and asks her what she is doing. Lydia tells her that this is never going to end. She needs to end herself to end this. She holds a sharp object up to her neck and begs Carol to push it in. She tells her she is weak. Carol needs to do it. Carol kills a walker behind her and then tells her they need to leave. She isn’t weak.

Negan fights through the storm to find Judith when he is hit with a flying object. He gets up and finds her with the dog. She is weak. He lifts her up and carries her with the dog on the leash. He leans her up against a fence ways down and gives her his coat. His leg is bleeding. He makes a tourniquet out of part of his clothes before they head off in the whiteout conditions to find the others.

Carol and the gang make it to Hill Top safe. Daryl tells Lydia to get some sleep. They leave for Alexandria in the morning. She asks him why he ever left. He tells her one day. Meanwhile, Carol tells Ezekiel she is going to Alexandria with the others tomorrow too.

The next day, Daryl, Carol, and the others arrive at Hill Top. Michonne hugs the kids. She heads to see Negan to thank him reluctantly. He asks about the Kingdom and the others. Michonne is surprised he cares. They talk.

Alpha returns to her pack. She has been away. Beta thinks she will be better now. She needs to get ready for what comes next, he tells her. She agrees. She extends her arm. He whips her.

Some time has passed. Judith talks by radio to Ezekiel who has good things to share. After they end their talk and Ezekiel leaves a mysterious woman comes across the radio.  The voice says, “Hello, hello, is there anyone out there?”