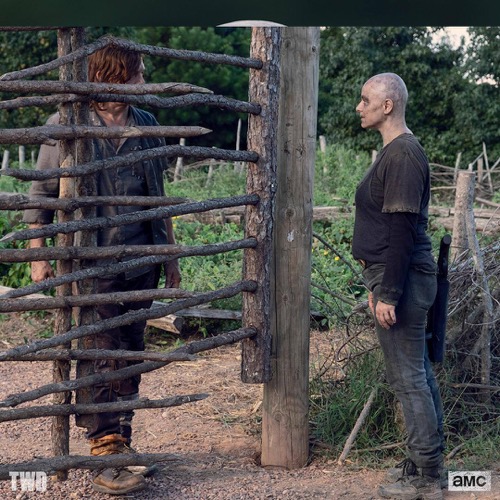 Tonight on AMC our favorite show The Walking Dead airs on an all-new Sunday, February 24, 2019, episode and we have your The Walking Dead recap below. On tonight’s The Walking Dead Season 9 episode 11 called, “Bounty,” as per the AMC synopsis, “The savage group led by Alpha confronts the Hilltop in a harrowing attempt to retrieve her daughter; a supply run for the Kingdom turns into a dangerous quest.”

Jerry, Carol, and the King are out in the woods. Jerry tells them he and Nabile are expecting a baby. They are all thrilled. Jesus and Tara arrive on horseback to collect meds. They bring Ezekiel a treaty scroll that he hopes all the communities can sign one day. They talk about Maggie and Michonne’s falling out.

Present day – The Whisperers stand outside the wall. Alpha, the mother, wants Lydia. Daryl tells them they should turn around so no one gets hurt. More arrive.

Enid looks over Earl who has burns from making horseshoes. Tammy Rose tells Enid that Alden is bound to show up soon. Enid gets word that the Whisperers are there. Daryl tells the gang that he doesn’t plan to hand over Lydia.

The Past – On a trip to get things for the fair, Ezekiel makes one last stop with Jerry, Carol and the others at an abandoned movie theater. Walkers growl inside. Carol gives Ezekiel an exasperated look.

The Present – Daryl makes his way to the property line and tells Alpha through the fence that she cannot have Lydia. Alpha has her men bring Luke and Alden out of the trees. She wants to make a trade.

The Past – Ezekiel wants to go in the movie theater and get a projector bulb for the community. They haven’t watched a movie in 5 years. They lure the walkers out with music before making their way in.

Present Day – Daryl decides he may have to give back Lydia but when he goes to get her, Tara tells him she escaped from her cell. They all split up to find her quickly before a fight breaks out.

One of the whisperers has a baby with her. The baby won’t stop crying. She lays the baby down in the field and walks away. Alpha explains to Luke and Alden that if the mother cannot quiet the baby the dead will. One of the newcomers to the community who was hiding in a nearby cornfield runs out and grabs the baby. She runs for it back into the corn stocks. After killing several walkers, she is rescued by Daryl, Tammy, and the others.

Past Day – Ezekiel and Carol talk in the movie theater as they work to get the projector bulb. They hope the festival will mend their relations with the other communities. After getting the bulb, Jerry accidentally drops it down a shaft when they are surprised by walkers.

Present Day – Henry and Lydia talk in the abandoned shack where the community kids hang out. Lydia cannot believe her mother came. She broke her own rules. Enid shows up and tells Henry they have to bring her back to her mother. Or Luke and Alden will die. Lydia comes out and tells him she will go, she has to.

Daryl brings Lydia out of the gates in exchange for Luke and Alden. When Lydia reaches her mother, she thanks her for coming. Her mother slaps her and demands she call her Alpha like the rest of the group. They all leave.

Past Day – Ezekiel tells them they should all leave. He doesn’t want them to risk anymore for the bulb. Carol disagrees. They need to stay and fight. It is only a few kills each. They manage to work together to get the bulb. On their way home, they talk about their win.

Present Day – Henry tells Daryl he knows why they had to send Lydia back but it doesn’t make it okay. Henry saw the scars on his back, he knows what it is like. Daryl tells them he doesn’t think it is all right but they did what they had to.

Past Day – They get the projector working. Carol and Ezekiel kiss in celebration.

Present Day – Tammy and Earl care for the baby left behind by the whisperers. The newcomers celebrate with drinks. Daryl is given a note that was left by Henry. He has left to go get Lydia. Daryl starts to leave to go after him. Connie insists she helps. They leave together with the dog.