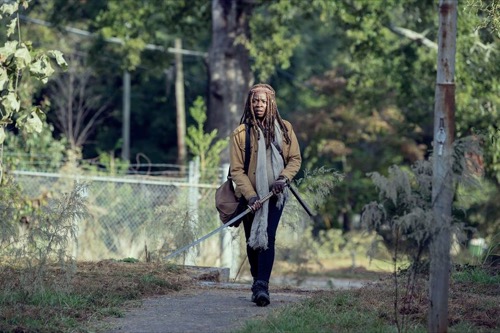 Tonight on AMC our favorite show The Walking Dead airs on an all-new Sunday, March 17, 2019, episode and we have your The Walking Dead recap below. On tonight’s The Walking Dead Season 9 episode 14 called, “Scars,” as per the AMC synopsis, “An outsider’s arrival forces Alexandria to rehash devastating old wounds; eye-opening secrets from the past are revealed.”

Daryl and a pregnant Michonne are down by the water. She is checking on Daryl who has been leaving out in the woods alone all this time alone, looking for Rick. He tells her he doesn’t get lonely. She shares that she does.

Present Day – Michonne and Aaron climb the wall to see Daryl, Connie, Henry, and the others. Daryl tells them he needs help. Henry is hurt and they are the closet. Michonne asks about the girl, Lydia. Henry responds that she is with them now.

Henry is stitched up at the infirmary. Michonne talks to Daryl who tells her they are headed to the Kingdom next.

The Past – Michonne meets Jocelyn a woman from her past once again while she is pregnant. She asks for help.

Present – Lydia looks at Henry’s wound. He is worried about a scare. Michonne wants to talk to Lydia alone. Michonne starts the conversation telling Lydia that she has risked a lot for her people. It would be easier if all she had to do is worry about herself, run away on her own. She tells Lydia maybe she should think about that.

By the water, Daryl and Judith sit and talk. She asks him if he is going to stay. He tells her he needs to keep moving. She tells him she has heard all of the stories about the Saviors. He tells her she hasn’t heard them all. She asks what her father would have done. Daryl is silent. “That’s what I thought,” Judith replies.

Past – Michonne watches as Jocelyn, her kids and the kids from the community all laugh and have fun by the campfire in Alexandria. She is so happy she has reunited with Jocelyn, a friend from when the world was normal. She wishes Rick could see all of this. Jocelyn tells her to keep looking. They found each other after 15 years.

Present – Michonne says goodbye to Daryl and the group in the dark as Judith watches angrily. Daryl tells her to tell Judith why she is the way she is. Michonne isn’t ready. She wants to keep her a kid.

Past – Judith heads to Jocelyn’s to pick up Judith. They are all missing. They search the streets, finding bloody footprints.

One of there own is dead in the alleyway and the sewer cover is open with blood leading to it.

Present Day – Michonne goes to talk to Negan when she cannot find Judith. He tells her that Judith has her own ideas about what happened in the past. Maybe Michonne needs to tell her. Judith is probably out there being like her mom, setting things straight.

Past Day – Daryl helps Michonne look for Jocelyn. She tells him that this girl was her real friend growing up. They went through so much and now she let her guard down and something bad has happened. She really needed a friend again.

Michonne and Daryl head into a building. They are surprised by several children and Jocelyn who attack them. They hang Daryl and Michonne from the ceiling by their wrists and brand them with Xs. Jocelyn tells them she has been teaching these kids to be strong and survive. Later, Daryl frees him and Michonne. She heads to find Judith and is attacked by the kids as Jocelyn encourages them. She is forced to kill Jocelyn and then the kids when they attack her, threatening to kill Judith. Michonne takes them all out and finally makes it to Judith. Daryl arrives at a bloody site.

Present Day – Michonne finds Judith slaying walkers in a field. She takes out a few walkers herself before getting to her. A walker grabs Judith. Michonne comes to her rescue after she tells her they need to talk.

Michonne tells Judith the story of their past. Michonne is in shock when Judith tells her she remembers it all. She understands why her mom did what she did. She understands that they love one another but they also love Daryl, The King, Maggie, Carol. So why aren’t they protecting them? Michonne cries.

Back at home, Michonne tells Judith that she was right. They need to protect the ones they love. They head out to the woods to pick up Daryl and the others. Meanwhile, two of the Whisperers come across the Kingdom. They plan to tell Alpha.