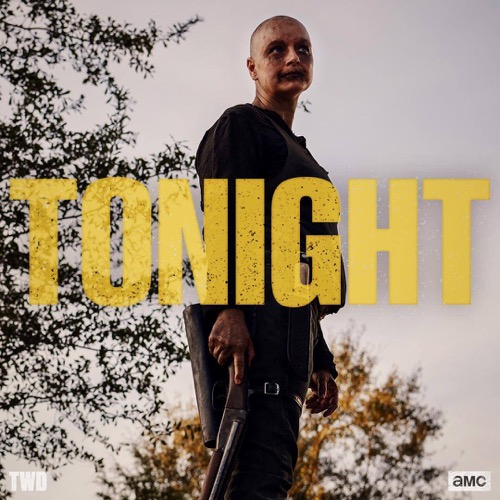 Tonight on AMC our favorite show The Walking Dead airs on an all-new Sunday, March 17, 2019, episode and we have your The Walking Dead recap below. On tonight’s The Walking Dead Season 9 episode 15 called, “The Calm Before,” as per the AMC synopsis, “the fair at the Kingdom is underway, with all four communities coming together in celebration for the first time in years, while some pacts are renewed, other deals will come at a much steeper price.”

A couple is fighting walkers in the woods when they see Hill Top. Five years later, they are celebrating their anniversary of marriage, happy within the gates of Hill Top. They are headed to the fair. The couple never makes it to the fair. They are grabbed by Alpha who scalps the woman.

At the fair, Ezekiel kicks off the festivities with a speech. He and Carol exchange sad looks. She has to leave to find Henry. Suddenly the gates open and it is Henry with Michonne and Daryl with the others. Ezekiel and Carol are thrilled to see Judith. She remembers them. Tara comes to see that they didn’t just bring Henry but Lydia too. She is angry. Michonne tells all the leaders they need to talk.

During the meeting, Gabrielle announces that they will give Lydia asylum. After talking they all decide to form a pact to fight for one another, all four communities. They all sign the pact with pride.

Henry and Lydia walk the fair. She is overwhelmed with all that has happened. Carol and Ezekiel invite her to watch a movie with Henry tonight. Meanwhile, Kelly and Connie talk. Kelly is mad Connie just left. They sign back and forth. Connie admits when the Whisperers did that with the baby it upset her, triggered something from her past she thought she had dealt with.

Siddiq and Michonne talk about Jerry playing with the kids. Siddiq will tell her the big news back at Hilltop.

Everyone gets ready to leave. Carol says goodbye to Ezekiel. She looks worried as she leaves with Michonne and the others.

Night has fallen as Daryl, Carol, Michonne, and Yumiko are on their trail. They are suddenly surrounded by walkers. They think some of them could be the whisperers. They work back to back, taking them all out. Just when they think they are done the whisperers shows up creating a circle around them. Beta comes out of the woods. He tells them that all he wanted was the girl.

Rosita comes to see Eugene. She has been tired so she missed him at the dunk tank. He has acquired some ham radio equipment. She tells him that they can still talk. She thanks him for talking to Gabrielle. She stays and they work in silence.

Henry cannot find Lydia at the fair. Tara and Gabrielle talk about their community pact. Henry finds Lydia. She is upset and tells Henry Gage and Rodney told her Henry and Addy have been a thing for a while. Meanwhile, Alpha walks the fair disguised as the woman who she killed that was headed to the fair with her husband. Ezekiel comes upon her and doesn’t know. He is welcoming and makes small talk. She plays alone pretending to be Debbie from Alexandria.

Lydia sits in the theater, watching the movie as she waits for Henry to show. Someone sits next to her. It is her mother.

In the circle, the whisperers have tied the hand of Daryl, Michonne, Carol and Yumiko. They tell Alpha who has arrived that they have granted Lydia asylum. She doesn’t care. She was weak. Alpha tells Daryl to follow her. He does. She shows him a hoard of walkers in the valley. Her people are among them. He wants to know if Lydia is dead. She won’t answer, telling him where her land is. She tells him to stay on his side or there will be trouble. Daryl leaves, telling her he can protect Lydia.

Daryl meets with the others and they leave. Meanwhile, Alpha tells Beta to leave her alone. She kills one of her own to feel better.

Walking through the woods and into the fields, Michonne and the others find Siddiq before they come upon the heads of several of their own on spikes; Henry, Tara, Tammy, Enith, Addy, Rodney, the Highwaymen.

Later, Siddiq tells the communities what happened. He was there, Alpha told him to tell the others. But what he wants to tell them is how they all fought together until the end. Like family. He cries, telling them they all have to keep going. To honor them.

Lydia and Daryl visit the field where the heads of their friends were put on spikes.