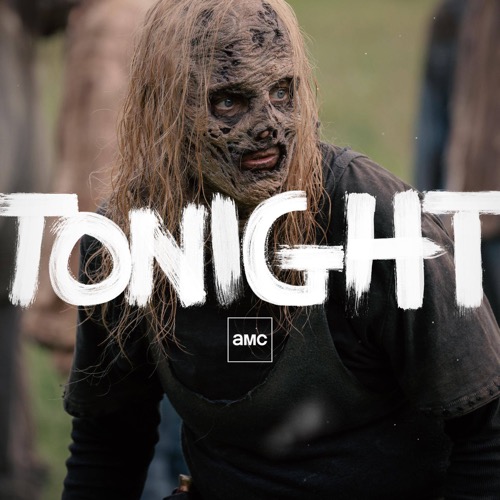 Tonight on AMC our favorite show The Walking Dead airs on an all-new Sunday, October 13, 2019, premiere episode and we have your The Walking Dead recap below. On tonight’s The Walking Dead Season 10 Episode 2 called, “We Are the End of the World,” as per the AMC synopsis, “A flashback reveals the origins of Alpha and Beta. Alpha attempts to toughen up Lydia as they prepare to walk with the dead. Meanwhile, the Whisperers create their herds.

Alpha first met Beta seven years ago. By then she was already learning how to adapt to this new world. She covered herself and her daughter in blood because that was the only way they knew how to travel with the dead, but her daughter lost her composure. The little girl screamed when she saw someone die in front of her and that alerted the zombies nearby. The zombies then turned on them and so they ran into a building. Where they met Beta. He didn’t like the company and he didn’t want to keep them around. He allowed her to stay for one night.

It was Alpha that turned that into an advantage. She communicated with Beta and they came to an understanding. They were both survivors. They could appreciate how this new world tested them and they even appreciated how only the strong were still left after everything. It probably made them feel better about themselves. That they were still standing and everyone else was dying. Fast-forward those same seven years, and nothing has changed. Alpha and Beta believed they hold a higher purpose just because they aren’t dead yet.

They were a few differences since then. Alpha has perfected her walk among the dead and there wasn’t Lydia. Lydia was Alpha’s daughter. The breakdown in their relationship happened right after the little almost got them caught. Alpha had wanted her daughter to be stronger for it and Lydia tried to be. Lydia didn’t want her toys anymore. She also told her mother that she wanted to be just like her and at first, Alpha was proud. Then Lydia made a mistake. Her mother was at first proud because she said she would have been forced to leave Lydia if Lydia didn’t change and that scared her.

Lydia begged her mother not to leave her. She reverted back to being a kid on being confronted with abandonment and Alpha took that as a weakness. She couldn’t even look at her daughter afterward. Alpha never forgot that moment, but she couldn’t help being reminded of it when the Sisters failed on their mission. The Sisters went with Alpha to “walk” and one of them broke down in tears because she remembered giving up her baby. Beta had to save them all and yet he told the grieving young woman that she would pay for what happened.

Beta thought they would kill the girl. It was Alpha that stopped the execution and that’s because she understood the young woman’s grief. She knew what it was like to abandon a child. She tried to tell Beta that it was nothing a woman ever forgot and he didn’t truly grasp what she was trying to say. It didn’t fully penetrate that mind of his until he saw Alpha forgive the girl. He thought that was a mistake and he challenged her about it. He said the young woman was sowing trouble within the pack and he believed the best thing to do would be to kill her.

Alpha, however, wasn’t going to let him question her judgment. She said the next step the woman crossed the line that she was willing to skin her herself and then she told him on her own to stay in his lane. She then sent the Sisters back out with Beta and this time she went with them. They all went walking with the dead and it was the sight of one of the zombies wearing a baby carrier that set the young woman once more over the edge. She decided to die at that very moment. She took off her mask and she attacked the Alpha.

The young woman was trying to kill them both. She created such a ruckus that the other zombies started coming towards them and would have eaten them if her sister hadn’t pulled the Alpha away from the fight. The Sisters stopped being the sisters. One of them died and the others went with Alpha and Beta back to the camp. The three of them eventually split up and Alpha had wandered off. She went back to the old camp and that’s where they built almost a shrine to her daughter Lydia. And that’s when Beta put the pieces together.

Beta wanted to know why. He recalled Alpha telling him that she killed Lydia because Lydia was too weak and so he demanded the truth. Only Alpha has been lying to him. She never killed her daughter and she set up the shrine because she somehow believes that Lydia will come back to her. She knew her daughter was weak. It just doesn’t change the fact she loved her and that Lydia was her baby. Alpha couldn’t have harmed her baby. She finally confessed as much, and she told Beta that they couldn’t reveal the truth about Lydia.

She believed it would make her appear weak to the pack. Alpha also assured her own position with Beta and she made sure he fell back in line. Together they would lead a horde to attack whoever crossed their borders, but in the beginning, she had to talk him down from hiding from the world. He was such a sacred thing. He didn’t even like showing his face because of some absurd idea that it would keep him safe and so Alpha and her daughter were once the ones propping him up. And they convinced him he wasn’t broken.

So, Beta should never forget that he would have been dead without them.