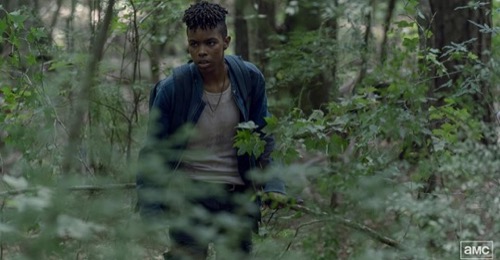 Tonight on AMC our favorite show The Walking Dead airs on an all-new Sunday, November 03, 2019, premiere episode and we have your The Walking Dead recap below. On tonight’s The Walking Dead Season 10 Episode 5 called, “What It Always Is,” as per the AMC synopsis, “Supplies go missing from Hilltop; Negan is idolized by an Alexandrian, and Ezekiel holds a secret.”

The Walking Dead opens tonight with Kelly, suffering from her hearing loss, in the forest, she eyes a boar and goes to hit it with a slingshot – she does it, but it is still alive and she stabs the animal. All of a sudden there are walkers, she kills one, and then there are others, they start feeding on the dead boar. She runs, there are too many of them, then she trips over a rock and falls. She has blood on her face, she is about to pass out when a walker’s hand goes to touch her shoulder.

After his escape from Alexandria, Negan is kneeling down by a river, he washes his face when a Brandon walks up, pulls a knife on him and says gotcha. He tells Negan he is fast, it took him forever to catch up – Negan smiles. Meanwhile, everyone, there is preparing for the rising tensions with the Whisperers.

Daryl and Siddiq are back, Ezekiel asks if he found Negan, he says no. Supplies are going missing at Hilltop.

Back to Negan, he is sharpening a stick for himself. Brandon keeps talking about the past – he said he heard he shot Carl Grimes, Negan gets upset and says he didn’t kill him and he would never kill a kid. They continue walking, they see barbed wire fencing and all of a sudden, a walking comes out of nowhere and jumps Negan, he rips it’s head off. Then Negan smashes its head with his foot. Negan tells Brandon he could have used his help, Brandon pulls out his old leather jacket and Lucille. Negan tells him to put those things back in his backpack, he doesn’t want to be recognized.

Aaron is also in the woods, he hears some walkers, then notices a whisperer killing one of them in the creek and Aaron watches as she cuts the walker’s stomach open.

Negan and Brandon are watching some walkers pass by when they hear screams. Negan goes to kill the walker and his knife gets stuck in the walker’s head. Negan heads where the screams are coming from, it is a bus, he heads inside, kills the walkers and finds a woman and a boy.

Connie is with Daryl, out looking for Kelly – he tries to reassure her. His dog is with them and he is helping to find a trail. They find the dead boar.

Ezekiel tells Siddiq that a quarter of their medical supplies are gone. Then Ezekiel starts to cough, when Siddiq tries to help check him, Ezekiel slaps his hand away – he tells him that he has thyroid cancer, his father fought it, but now – these are different times.

The woman tells Negan and Brandon her sad story about how they landed up in the bus – Brandon tells them that they have all been there. The two go for a walk, Brandon asks Negan if he thinks the two are hiding weapons. Negan tells Brandon that he appreciates everything that he has done since Alexandria, but it is only going to get more dangerous from here, he thinks he should go on his own, and Brandon should go back home. Brandon says he can’t go back home, he can’t lie, where is going to tell them where he was. Negan thinks on it, then tells the kid off, he is mean to him, Brandon says he is just like all the rest and gets up to leave.

Alpha is with her people, one of them wants to cut the enemy down all at once. Alpha asks if anyone agrees, nobody dares to say anything – then Alpha stabs the guy in the leg, then the arm. She passes her knife over to another person who stabs the guy behind the head, he is dead.

We see Negan, he walks up to the little boy who is playing with an airplane and tells him that his mother is packing – the boy asks where Brandon went. Negan says he is gone looking for supplies; then he says he is going to be real, he told Brandon to get lost. Negan tells the boy about flying in a plane, how it feels. Then he tells him that he is going to miss a lot growing up in this screwed up world. Negan goes on to tell him that he knows a place that will take them in, but they can’t tell anyone who led them there.

Back to the woods, the whisperer is killing a walker in the creek, when she cuts her hand and Aaron sees it – he has bandages in his backpack, he tosses them to her, she takes them and runs.

Daryl and Connie find Kelly, she looks like she is going to be ok. Kelly tells her to show him the loot, Daryl sees it and can’t believe she was the one stealing from them after they took them in.

Negan hears his familiar whistling, he goes around the bus and sees Brandon, the woman and boy are dead on the ground – he says he realizes that Negan was testing him, and looks proud of what he did. Negan hits him on the head with a rock and kills him. Negan takes his leather jacket and Lucille out of Brandon’s backpack and walks away.

Daryl is back with Kelly and the supplies.

Siddiq is on the radio and inquires about Rosita – he says he is heading out that night, then he asks if Carol is around. Ezekiel takes over the mic and Carol is just about to go on, he turns off the power.

Alpha sees the cut on the girl’s arm after the creek incident and tells her the man who they killed could prove useful, a new mask for her.

Negan is out in the woods, he has his leather jacket on and Lucille over his shoulder. All of a sudden there are walkers and Negan couldn’t be happier to kill them and take his frustrations out on them while he chants the nursery rhyme, “the three little pigs.” All of a sudden, one of the walkers fights back, it is not a walker, after all, it is a Whisperer.