The Young and the Restless Spoilers: 2 Weeks Ahead – Rey Insists On Paternity Test – Mia’s Moment of Truth Gives Shocking Result

BY Heather Hughes on May 2, 2019 | Comments: 2 comments
Related : Soap Opera, Spoiler, Television, The Young and the Restless 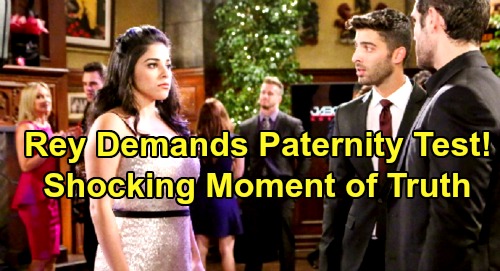 The Young and the Restless (Y&R) spoilers tease that Rey Rosales (Jordi Vilasuso) will make an urgent demand. During new Y&R episodes the week of May 13-17, Rey will insist on a paternity test ASAP. It’ll be safe for Mia Rosales (Noemi Gonzalez) to get one, so Rey will want to know the truth once and for all.

Of course, Arturo Rosales (Jason Canela) will be eager to learn the truth, too. Rey and Arturo’s futures could look very different depending on the outcome of this paternity test. They both know that, so they want to be prepared for what’s ahead. Mia’s bringing a baby into this world, but they need to know who’s going to have to step up as Dad.

Rey might himself feeling torn as he awaits the results. He’s always wanted to be a father, but not like this. Mia is pretty much the last person on the planet that Rey wants to co-parent with. If the baby is Rey’s, he understands that he’ll be stuck with Mia until this child is grown. Rey also gets that it’ll complicate his relationship with Sharon Newman (Sharon Case), so it’s a tricky situation all around.

Even so, all of this has become quite real for Rey. The part of him that wants to be a dad may still long for that. The Young and the Restless spoilers say the results will eventually be revealed, so it’ll be the moment of truth for Mia…or could it be another lie instead? This might provide one last chance at manipulation, so we should be careful about what we believe.

Y&R fans know what Mia’s capable of, so this could be her last scheme before she hits the road. No matter the true outcome of the paternity test, Mia will be leaving The Young and the Restless before long. The same goes for Arturo, so he might stand a better shot at being the “baby daddy.” Mia might manipulate the test results to make Rey look like a proud papa, but Arturo could be the one in the end.