The Young and the Restless Spoilers: Abby Rebounds With Nate – Are They A Good Match?

BY hellodrdavis on April 29, 2019 | Comments: 2 comments
Related : Soap Opera, Spoiler, Television, The Young and the Restless 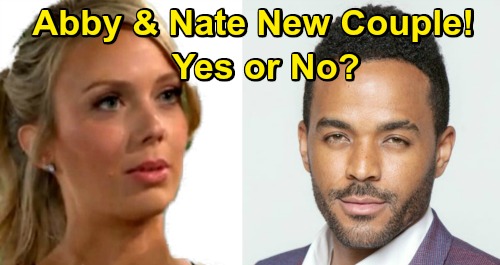 The Young and the Restless spoilers tease that Abby Newman (Melissa Ordway) is ready for a new man. She had a good thing going with Arturo Rosales (Jason Canela), but he came into the relationship with some serious baggage…baggage named Mia Rosales (Noemi Gonzalez). Mia was always a thorn in Abby’s side, and she frequently taunted Abby about her own past relationship with Arturo. It was a lot for Abby to take.

But Abby endured the Mia stress and ended up getting engaged to Arturo. For a while, it seemed like their relationship was going well. Abby even did a big spread in local magazine announcing their engagement and made a big deal of the situation. But the whole thing just wasn’t meant to be, as Arturo eventually slept with Mia again.

And that was the last straw for Abby, who promptly dumped Arturo and proceeded to smash up his beloved truck. Y&R viewers know that she later softened toward him a little when he helped out at her new restaurant, Society, but the moment she found out that Mia was pregnant, that was the end of Arturo for her.

Of course, Y&R viewers know that Jason Canela, who portrays Arturo, will be leaving the show very soon, so we’re not going to be looking at a reunion for Abby and Arturo. Abby’s done, and she’ll be ready for a new relationship soon. But who will she turn to?

Well, on Society’s opening night, Abby spent some time dancing with none other than Nate Hastings (Sean Dominic), which led some to wonder whether TPTB were going to pair up these two. More recent Y&R spoilers indicate that Abby and Nate will indeed be spending more time together going forward, so it appears that we’re looking at an Abby/Nate pairing for the summer.

Abby could use a good summer romance to get her mind off everything that happened with Arturo. Of course, Abby may soon learn that Mia is the one who attacked Lola Rosales (Sasha Calle), thinking that Lola was Abby, so Abby will probably be happy to be rid of Arturo and all the drama (and danger) that came with that relationship.

Abby and Nate would probably be good for each other. Nate has been on the Genoa City scene for a while now without a love interest, so he’s due. And Abby needs a good rebound romance with promise, and it looks like Nate could provide that. They’d probably be a good match for each other.

After all, both Nate and Abby are driven, career-minded people. Arturo was a little clingy, which didn’t exactly suit Abby, and Nate doesn’t seem to be that way at all. We could see the two of them working hard in their respective careers, and then playing hard together after hours. Plus, Victor Newman (Eric Braeden) would likely be very happy with Abby being with Nate.

Going forward, look for Nate to keep catching Abby’s eye, and for Nate to start pursuing Abby. Would that pairing make you happy? Do you think that Nate and Abby a good match? Stay tuned to the CBS soap and don’t forget to check CDL often for the latest Young and the Restless spoilers, updates, and news.