The Young and the Restless Spoilers: Abby Seeks the Truth About Summer’s Wedding – Discovers Mia’s Secret Attack On Lola 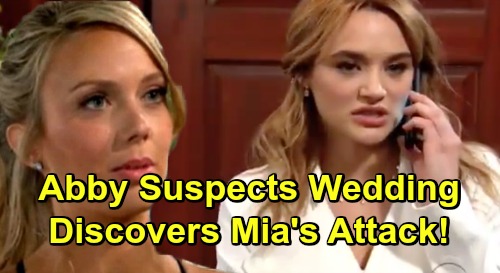 The Young and the Restless (Y&R) spoilers tease that Abby Newman (Melissa Ordway) will deal with some suspicions. Some things just won’t add up for Abby on new Y&R episodes during the week of March 11-15. For starters, there’ll be Summer Newman’s (Hunter King) sudden engagement to Kyle Abbott (Michael Mealor).

Abby will wonder how in the world Summer managed to pull this off. She’s gotten call after call from Kyle throughout Lola Rosales’ (Sasha Calle) ordeal. Abby knows Kyle wanted nothing more than to be by Lola’s bedside the whole time. He was constantly pushing Abby to put in a good word for him with Arturo Rosales (Jason Canela).

That’s why it’ll raise huge red flags when Abby hears the engagement news. She’ll assume Summer’s up to something since Kyle was so previously devoted to Lola. Of course, there could be something else for Abby to be suspicious about. We can’t forget that Mia Rosales (Noemi Gonzalez) is keeping a huge secret.

Since Rey Rosales (Jordi Vilasuso) has vowed to keep that secret, Y&R may work the Abby angle soon. She was the original target of the attack, so it makes sense for Abby to start putting everything together. Perhaps Mia will do or say something that leaves Abby wondering what’s up.

If Abby finds out about Mia’s “pregnancy,” that’d be a nice start. From there, Abby might see some indicators about Mia’s deception. She might question what Mia’s hiding and possibly get some hints about the attack. Lola was wearing Abby’s coat that night, so that should register as a clue for Abby at some point.

Mia and Abby called a truce recently, but there’s no way that’ll last. Sooner or later, the truth about Mia’s actions has to come out. Abby may not be the first one to expose it, but she could still be on the path to the real story.

The Young and the Restless spoilers suggest Abby and Arturo have some wedding drama coming up eventually. Maybe Mia’s attack secret will take center stage at the big event! Whatever the case, Mia’s created a dangerous web of lies and none of them are going to hold up.