BY Heather Hughes on July 4, 2019 | Comments: one comment
Related : Soap Opera, Spoiler, Television, The Young and the Restless 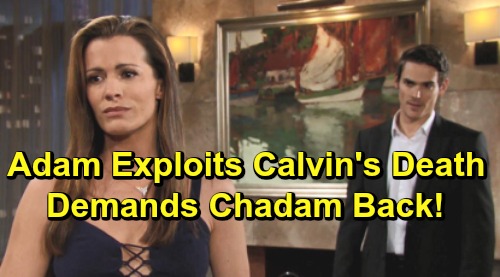 The Young and the Restless (Y&R) spoilers tease that Chelsea Newman (Melissa Claire Egan) will cope with her husband’s sudden demise. After Chelsea discovers Calvin Boudreau’s (John Burke) dead body on their hotel room floor, she’ll lean on Nick Newman (Joshua Morrow) for support. Nick will be a source of stability for rattled Chelsea during this difficult time.

Adam Newman (Mark Grossman) will seethe when he finds Nick and Chelsea in a warm embrace. He’ll be even more outraged when Nick invites Chelsea to stay at his place. Naturally, Adam won’t just retreat to his penthouse and let this play out. He’s the kind of guy who takes matters into his own hands, so that’s exactly what he’ll do.

The Young and the Restless spoilers say Adam will march over to Nick’s house and ring the doorbell. He’ll interrupt a close moment between Nick and a distraught Chelsea, who’ll just hope Calvin didn’t suffer as he passed. Chelsea may not have been madly in love with Calvin, but he was her husband and she appreciated the security he offered. She’ll definitely need time to process and mourn the loss.

Adam Newman Believes The Death Is The Ideal Outcome

Unfortunately, Adam isn’t a patient man. He’ll basically think fate has done them a favor. There’ll be no signs of foul play when it comes to Calvin’s death – although you never know what dirty tricks might be revealed later. “No signs of foul play” doesn’t necessarily mean there wasn’t foul play. Someone like Adam might’ve been crafty enough to not leave any signs behind.

Regardless, Adam will think this is the ideal outcome. He’ll barge in at Nick’s and once again insist on talking to Chelsea alone. Adam will be sorry for how things played out during their last conversation. He’ll probably suggest they were both dealing with a lot of difficult emotions and memories.

However, Adam will think Calvin’s demise could mean a fresh start for the “Chadam” family. He’ll contend that there’s nothing standing in their way now. Adam will add that Chelsea’s life was radically altered by his own presumed death. He’ll argue that Chelsea never would have ended up with Calvin or even Nick if they hadn’t been thrown some unlucky breaks.

Chelsea Newman Will Resist A Chadam Reunion For Now

Now Adam will feel like their luck is turning around. He’ll urge Chelsea to accept their destiny and reunite with him, but his timing should be a problem. Chelsea will still be in shock over the loss of her husband. It’s inappropriate for Adam to come rushing over right after Calvin croaks. He’ll practically be dancing on Calvin’s grave!

Nevertheless, Adam will maintain that they’re the loves of each other’s lives. He won’t want Chelsea to stubbornly throw away her soul mate. The Young and the Restless spoilers hint that Chelsea will resist a “Chadam” reunion for now, but how long can she hold out? Adam’s pull is awfully strong, so it’ll be interesting to see what’s in store.

Are you rooting for Chelsea and Adam? Would you rather see them with different love interests instead? We’ll give you updates as other Y&R news comes in. Stick with the CBS soap and don’t forget to check CDL often for the latest Young and the Restless spoilers, updates and news.