The Young and the Restless Spoilers: Adam Meets His Match – Is It Amanda Sinclair?

BY hellodrdavis on September 23, 2019 | Comments: one comment
Related : Soap Opera, Spoiler, Television, The Young and the Restless, Uncategorized 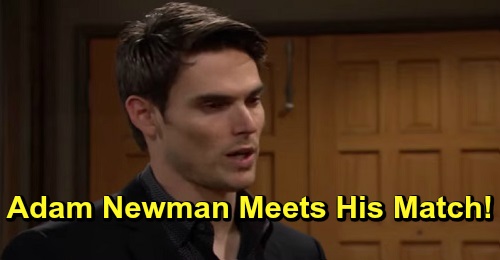 The Young and the Restless spoilers tease that Adam Newman (Mark Grossman) will soon meet someone who will rock his world. As Y&R viewers know, Adam has been on a mission to bring down the Newman family and grab hold of Newman Enterprises. Most recently, he tampered with Victor Newman’s (Eric Braeden) medication in order to cause chaos for his family and allow himself an opportunity to seize control of the family business.

Adam has also seriously cause havoc with other Genoa City residents. Because of his relentless pursuit of Sharon Newman (Sharon Case), her relationship with Rey Rosales (Jordi Vilasuso) ended and Sharon had to get away from Genoa City for a while, just to regroup. And Adam is causing strain between Chelsea Lawson (Melissa Claire Egan) and their son Connor Newman (Judah Mackey), as he wants to spend more and more time with the boy.

But according to Y&R spoilers, Adam will soon encounter someone who is his match. But who on canvas right now could possibly be considered to be Adam’s equal? It would need to be someone appropriately devious, underhanded, and dynamic. We think it must be a new person on the Genoa City scene, and there’s one character who has just caused a big stir with her presence who could very well be connected to Adam, and that’s Amanda Sinclair (Mishael Morgan).

As Y&R viewers know, Amanda is the lawyer who is allegedly representing Chance Chancellor (John Driscoll) to contest Katherine Chancellor’s (Jeanne Cooper) will. Amanda suddenly showed up at Devon Hamilton’s (Bryton James) door, which was a huge shock to him, since she looks exactly like Devon’s late wife, Hilary Hamilton (Mishael Morgan).

Of course, Amanda played dumb, like she didn’t know that she was a doppelgänger for Hilary, but it seemed pretty suspect that someone who looked just like Hilary would be representing Chance against Devon in the lawsuit over the will. But later, she was shown on the phone with an unknown person being quite dramatic and showing perhaps a devious side. She certainly seems to have a strong personality, and that leads us to wonder whether she might be the “match” to Adam that the spoilers are referring to.

And given that there was a connection between Chance and Adam back when Adam was playing poker in Las Vegas, it makes sense that he and Chance could be in cahoots to try to bilk Devon out of his fortune. And if that’s the case, then that would put Amanda right into Adam’s trajectory and we’ll probably see them interacting together soon.

It will be interesting to see Adam deal with someone described as his equal. And if that person does turn out to be Amanda, does that mean that we’ll see a romantic future between the two? Or perhaps they’ll simply be business partners, in cahoots with Chance to get their hands on Devon’s fortune. Either way, it would make for some great drama!

What do you think? Will Adam’s “match” turn out to be Amanda? Stay tuned to the CBS soap and don’t forget to check CDL often for the latest Young and the Restless spoilers, updates, and news.