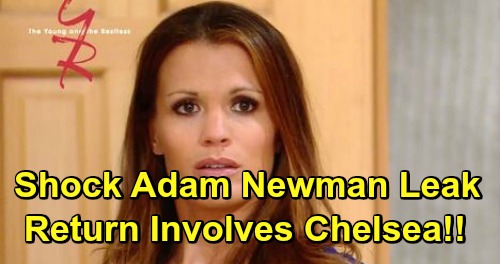 The Young and the Restless (Y&R) spoilers tease that Adam Newman’s comeback is inching closer. Y&R already revealed they’ve been on the hunt for a recast, and it looks like they may have found the perfect fit. There’s no word on which handsome actor might be stepping into the role, but a new leak suggests Adam’s story is moving forward.

RC Cates is the composer and music supervisor at The Young and the Restless, so he often tweets out both old and new music that’ll be featured in upcoming episodes. For example, he tweeted a composition called “Let’s Take A Dip,” which didn’t make much sense until it played as Lola Rosales (Sasha Calle) tumbled in a swimming pool!

Now Cates is offering another hint about what might be in the works. This one involves Adam and his return storyline, so it’s worth paying attention to. The name of this music cue is “Chelsea Is My Wife,” so that’s a huge tipoff. It could indicate that Chelsea Newman’s (Melissa Claire Egan) comeback is on the way as well.

Egan might be willing to step into the role again, which would be great since fans probably wouldn’t like two recasts at once. Having Chelsea back could help us get used to the new Adam a bit quicker. She could sell us on their familiar love story.

However, there’s a good chance Chelsea’s comeback won’t happen right off the bat. The sad tune Cates tweeted suggests that maybe Adam will be distraught. Perhaps he’ll realize he can’t find his love and have the reunion he’s dreaming of.

Chelsea went on the run the last time we saw her, so Adam’s despair could drive his return from the “dead” story. He could blame Victor Newman (Eric Braeden) and Nick Newman (Joshua Morrow) when his search turns up nothing. This would also give Adam an opportunity to fall in love with someone else. Then, Chelsea could reenter the picture and give us a hot love triangle. It’d be the ideal soapy outcome.

When a viewer asked if Cates’ tweet meant Chelsea was coming back, he replied that he hopes so. Cates couldn’t confirm it at as a teaser for Chelsea’s return. That could mean Chelsea will be part of the story while still off canvas, or he could just be preserving the surprise. After all, Cates wouldn’t be allowed to spill news that big on his Twitter account.

Regardless, The Young and the Restless spoilers say Adam will make quite a splash when he hits Genoa City again. Will missing Chelsea drive him down a dark path? Will Adam eventually be reunited with his true love? We’ll give you updates as other Y&R details emerge. Stay tuned to the CBS soap and don’t forget to check CDL often for the latest Young and the Restless spoilers, updates and news.