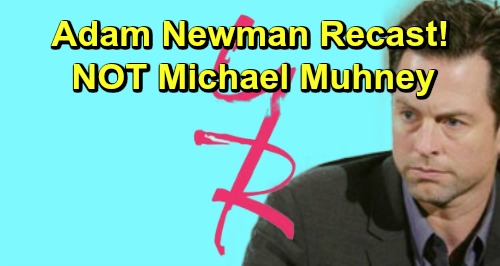 The Young and the Restless (Y&R) spoilers tease that a long-awaited recast is on the way. According to Soap Opera Digest, Y&R is finally on a mission to find the new Adam Newman. Many fans have been pushing for Adam’s comeback ever since Justin Hartley left the role and Adam was presumed dead in an explosion.

When a soap takes the presumed death route, it’s safe to assume the character will be back eventually. It’s always just a matter of when they’ll actually make it happen. Now that Josh Griffin has taken over as Y&R’s head writer and Tony Morina is the show’s executive producer, changes are brewing. It makes sense that they’d want to bring Adam in as part of their revamp.

Word has it casting cuts are coming up, so that’ll free up some money and story space for an Adam Newman recast. There’s been some speculation that Adam could be the mysterious Newman tormentor, but we’re not sold on that theory. After all, this story is in the homestretch. Interrogation and courtroom scenes have already been filmed, so we’re rapidly building to the climax.

Since Y&R is apparently still in the process of finding a new Adam, that lessens the likelihood that he’s behind the J.T. Hellstrom (Thad Luckinbill) drama. Griffith and Morina undoubtedly want to wrap up former Head Writer Mal Young’s material as quickly as possible. This storyline will have been going on a year in April.

By the time they find a new Adam and his comeback hits the air, it could be several months from now. The J.T. chaos is really revving up, so it probably won’t be going on by then. Instead, Adam’s return can be the next big thing. Griffith and Morina will want to leave their own mark, so putting Adam back in the mix will be a good way to do it.

Of course, we should point out that this news is about a recast and not a returning actor. It sounds like The Young and the Restless nixed Michael Muhney as an option. He played the role of Adam before Hartley took over and still has plenty of supporters out there.

However, The Young and the Restless spoilers point to a fresh face. That’ll just have to be good enough for those who are eager to see Adam Newman back on canvas. For many viewers out there, any Adam is better than no Adam!

Are you excited about this recast news? What kind of storyline do you want for Adam? Should Y&R bring Chelsea Newman (Melissa Claire Egan) back as well? We’ll give you updates as other Y&R details emerge. Stay tuned to the CBS soap and don’t forget to check CDL often for the latest Young and the Restless spoilers, updates, and news.