BY Heather Hughes on December 21, 2019 | Comments: one comment
Related : Soap Opera, Spoiler, Television, The Young and the Restless 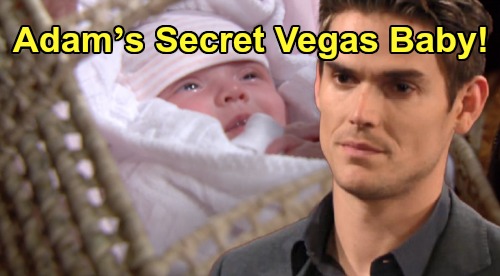 The Young and the Restless (Y&R) spoilers tease that a mystery will unravel on the CBS soap. During the week of December 23-27, Victor Newman (Eric Braeden) and Nikki Newman (Melody Thomas Scott) will get a big surprise. After Nikki goes out riding, she’ll be floored when she spots a basket with a newborn baby in it. Nikki will scoop up this precious little girl and take her back inside to Victor, where they’ll wonder who would’ve abandoned this poor child on Christmas.

Of course, Y&R fans have to wonder that as well – especially since this baby wasn’t left outside a hospital or somewhere more random. Someone specifically wanted this baby to be left on the Newman ranch – so much so that they presumably risked getting caught by security. This person went to a great deal of trouble to make sure the Newmans found this baby and not anyone else.

We can assume it was the child’s mother who left her there, but who could that mother be? More importantly, why would she leave her baby with Victor and Nikki? There are a couple of options to consider here. The first one would be pretty unfortunate, but we have to at least mull it over. It’s entirely possible this will be another plot point that goes nowhere at all.

Let’s face it: Y&R’s writing team has a habit of setting up and promptly dropping what could’ve been good stories. There’s a chance this will be a random thing after all. It wouldn’t make much sense, but it could just be meant to give “Niktor” some holiday scenes and nothing more.

However, it would be a massive mistake not to go somewhere with this. We’re talking about a new baby that could turn a character’s life upside down! They should really make it the kid of somebody on canvas. If The Young and the Restless actually takes the soapy route, who could this baby belong to?

We’ve established that the mother is probably abandoning this kid, who may have a connection to the Newmans. Since Adam Newman (Mark Grossman) was living in Vegas as Spider before he came to Genoa City, he surely had a bunch of hookups out there. What happens in Vegas clearly doesn’t stay in Vegas when it comes to Adam! One Vegas secret’s already on the verge of getting out and this additional secret could add to Adam’s problems.

Did Adam Newman get a woman pregnant? It’d be interesting to see a baby shake things up for Adam. Knowing Nick as well as we do, he might try to protect this kid from his brother. Nick always seems to want all Adam’s kids! Chelsea Lawson (Melissa Claire Egan) would obviously get caught in the middle of this mess as well.