The Young and the Restless Spoilers: Amanda and Abby Go to War Over Nate – Y&R’s Fierce New Rivalry? 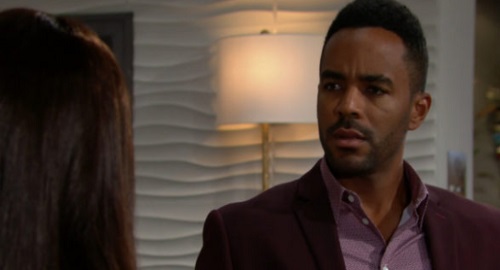 The Young and the Restless (Y&R) spoilers tease that Amanda Sinclair (Mishael Morgan) will make some serious waves in Genoa City. She’s already becoming quite a pot-stirrer, and many are growing concerned about this twisted game. However, Amanda is still going to need a love interest eventually. Someone will either have to appreciate Amanda’s potential dark side or see the good in her, so who’s it going to be?

Y&R could go with Adam and Amanda as a romantic pairing, but perhaps they won’t since Adam has other good options. The show could just as easily reunite Adam with Sharon Newman (Sharon Case) or Chelsea Newman (Melissa Claire Egan). Amanda might work better as a fierce foe for Adam or a platonic partner in crime like Phyllis Summers (Michelle Stafford).

That leaves us to consider other possibilities for Hilary Hamilton’s (Mishael Morgan) doppelganger. Devon Hamilton (Bryton James) clearly won’t be falling for Hilary anytime soon. He’s uneasy and angry over this whole situation, so that story will have to wait. We’re willing to bet Y&R won’t let Morgan and James’ chemistry go to waste, but there’s no rush on making them romantic scene partners again.

That’s especially true since Devon and Elena Dawson (Brytni Sarpy) are really just getting started. It hasn’t been that long since they exchanged their first “I love you,” so this is all pretty new. They’ve proven to be a popular pairing, so why wreck it just yet? Amanda might make the most sense with Nate Hastings (Sean Dominic) since it could set up some interesting drama.

For starters, Devon wouldn’t like it much and Elena would voice complaints, too. Since Nate’s tight with Devon and Elena, it’d be great to see some conflict here. Nate might see Amanda’s softer side and defend her despite the naysayers.

Of course, Nate and Abby Newman (Melissa Ordway) have faced commitment issues and are honestly lacking in the chemistry department. They’re probably not winning any popularity contests, so it wouldn’t hurt to break up “Nabby.” As a bonus, just think about the feud we’d get out of that. It’d be fun to watch Abby and Amanda become aggressive adversaries.

Before Hilary was killed off, The Young and the Restless seemed to be toying with the idea of a Nate and Hilary pairing. Once it became obvious Morgan was leaving, the show backed away from that and focused on Hilary’s connection to Devon. It was a smart call since they did the whole “deathbed wedding and dying in her true love’s arms” thing.

Nevertheless, Y&R could take Amanda in the direction that they intended once upon a time for Hilary. Would you like to see Nate and Amanda get together? Would you be on board for the Abby and Amanda rivalry that’d result?