The Young and the Restless Spoilers: Big Trouble Ahead For Kyle and Lola – See Why Kola’s Relationship Destined To Fail

BY hellodrdavis on May 27, 2019 | Comments: one comment
Related : Soap Opera, Spoiler, Television, The Young and the Restless 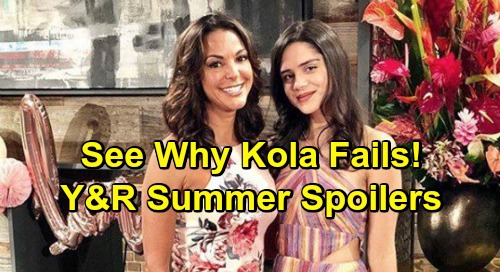 The Young and the Restless spoilers tease that Kyle Abbott (Michael Mealor) and Lola Rosales (Sasha Calle) have been on cloud nine lately. Since Rey Rosales (Jordi Vilasuso) moved out of his apartment and into Sharon Newman’s (Sharon Case) house, Kyle moved in with Lola, and the two lovebirds have been enjoying each other and adjusting to their new living situation.

But it seems that it may be the calm before the storm for “Kola.” On soaps, when couples get too happy and giddy, as Kyle and Lola have been recently, there are usually problems lurking right around the corner. And as we look forward to some upcoming Y&R spoilers, we can see some potential trouble spots that could develop as the summer progresses.

According to the Soap Opera Digest summer preview, “Kyle and Lola’s love story will take an interesting turn when they decide to cohabitate.” Right now, living together is all fun and games for the pair, but actually living with someone over the long term can be more challenging than it seems at first.

Kyle and Lola come from very different backgrounds, and that could spell trouble as they try to co-exist. Kyle’s used to having a support staff doing everything for him domestically, and Lola’s used to doing everything herself. We could be looking at some interesting times as these two try to make their living situation work.

Of course, we can’t rule out Summer Newman (Hunter King) as an obstacle for Kyle and Lola. Summer is still hurt by Kyle’s rejection of her, and while Kyle is expecting a smooth marital dissolution, Summer could make things difficult and she could drag the process out.

SOD’s summer preview also indicates that Summer will try to make waves for Kola wherever possible, so look for her to keep manipulating Kyle. Of course, that may be more difficult for her now that she and Kyle aren’t working directly together at Jabot anymore, but if we know Summer, she’ll find ways.

It looks like Summer will initially try to make Kyle jealous when she takes up with Theo Vanderway (Tyler Johnson). We’ll see if she’s able to get under Kyle’s skin with her flirtations with Theo. Even if Kyle doesn’t take the bait, Summer’s attempts could still annoy Lola, which could cause friction.

So far, Lola’s trials and tribulations with Kyle have occurred outside of the watchful eye of her mom, Celeste Rosales (Eva LaRue). But when Celeste shows up in Genoa City this summer, things could get hairy. After all, Mama Rosales may not be too thrilled to learn that her daughter is living with Kyle, who is technically still married to Summer. Rey wasn’t thrilled with Lola’s new living arrangements, and we can’t imagine that Celeste will be, either.

At any rate, Kyle and Lola will have some challenges going forward. Right now, their relationship seems pretty strong, but Genoa City is a tough place for couples to thrive in the long term. Do you think that Kola will be able to endure everything that will be thrown their way this summer? Stay tuned to the CBS soap and don’t forget to check CDL often for the latest Young and the Restless spoilers, updates, and news.