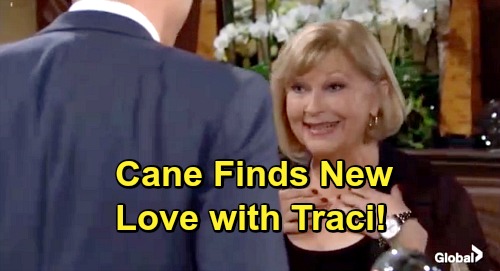 The Young and the Restless (Y&R) spoilers tease that Cane Ashby (Daniel Goddard) is doing his best to let go and move on. Lily Ashby (Christel Khalil) has made it perfectly clear that she doesn’t want to reunite. She’s ready to head down a new path, so Cane’s trying to head down one of his own.

Of course, Cane’s found some support along the way. Traci Abbott (Beth Maitland) has been a huge help to Cane during this difficult time. In fact, she’s one of the few bright spots in his life these days. Likewise, Traci seems to really light up when she’s around Cane.

Cane even asked how she was doing on Wednesday, and no one’s asked Traci that in a long time! She’s normally the one who has to dish out all the comfort and support. Y&R is giving them a connection that’s about real give and take. Traci also told Cane that the protagonist of her novel was loosely based on him. She admitted Flynn was a bit of a mess, but he’s still her hero.

There’s no guarantee of what’ll happen next, but The Young and the Restless has all the makings of a romance. It’s true that Cane and Traci seem like kind of an odd couple, but we can’t ignore the signs. If any other characters had all these bonding scenes and were saying these lovely things to each other, we’d assume they were headed in a romantic direction. Maybe we should assume it here, too.

Y&R may at least give it a try. There’s only a 13-year age difference between these actors, so it’s not like it’s anything outrageous. Still, Traci has a certain motherly vibe about her. It comes mostly from her personality and how she always takes care of everyone. She’s the mother hen of Y&R, so they might be better off pairing her with someone who feels older and wiser.

Jett Slade (Gilbert Glenn Brown) would be a nice option for Traci, but The Young and the Restless doesn’t seem to have that in mind right now. They’re really pushing Traci and Cane together, so a romantic relationship could indeed be blooming.

Can you get on board the love “Trane” or is this pairing just not doing it for you? We’ll give you updates as other Y&R news comes in. Stay tuned to the CBS soap and don’t forget to check CDL often for the latest Young and the Restless spoilers, updates, and news.