The Young and the Restless Spoilers: Cane Kidnapped In Vegas – Attacked and Knocked Out After Finding Chance

BY hellodrdavis on October 5, 2019 | Comments: one comment
Related : Soap Opera, Spoiler, Television, The Young and the Restless 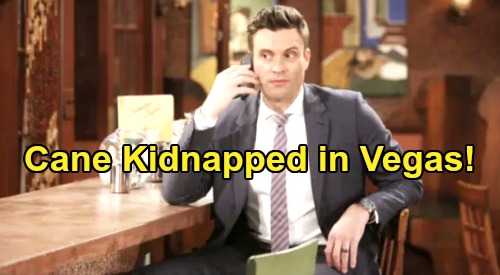 The Young and the Restless spoilers tease that Cane Ashby (Daniel Goddard) will find himself in deadly danger. As Y&R viewers know, he was recently revealed to be the recipient of Katherine Chancellor’s (Jeanne Cooper) fortune in a “will” that was produced by attorney Amanda Sinclair (Mishael Morgan). Neither Cane nor Devon Hamilton (Bryton James) believe that this will is authentic, nor that it supersedes Katherine’s dying wish thatDevon receive her fortune.

Amanda claims to be working on behalf of Chance Chancellor (John Driscoll), but Devon and Cane seriously doubt that. And Jill Abbott (Jess Walton) is adamant that Chance would never be involved in something as underhanded as trying to take Devon’s fortune away from him. So, Cane decided to do a little investigating and try to get to the bottom of what’s going on.

According to Y&R spoilers, Cane will try to find Chance, and it looks like that search is going to lead him directly to Las Vegas, since that was Chance’s last known location. Chance was believed to be spending time there with Adam Newman (Mark Grossman) over the summer, before Adam returned to Genoa City. At any rate, Cane will soon find himself in Las Vegas trying to hunt down both Chance and Adam.

But according to Y&R spoilers, Cane will find someone else in Las Vegas…Phyllis Summers (Michelle Stafford). How Phyllis winds up on the scene remains to be seen, but as Y&R viewers know, she’s been interested in the connection between Adam and Chance for some time now. It looks like she might take it upon herself to trek to Las Vegas to hunt down Adam and wind up bumping into Cane in the process.

That will certainly surprise Cane, but soon he’ll have other problems to worry about. He’ll appear to finally have tracked down Chance, and the two will trade texts to arrange a meeting, but Cane will then get bashed over the head and knocked out! He’ll wind up being kidnapped, so clearly someone won’t want him poking around about Katherine’s will and/or getting in touch with Chance.

But who could have kidnapped Cane? Is it Chance himself? Jill seems to be under the impression that Chance is still a good, decent person who wouldn’t be caught up in anything shady. And she could be right about that – after all, Chance could be in trouble himself, with someone posing as him to lure Cane into a trap. Or could it be Adam who’s behind all of this nonsense?

Since Adam and Chance were previously linked in Las Vegas, there’s a good chance that Adam’s involved somehow in what’s going to happen to Cane, or at least that he knows something that could shed some light on the issues surrounding Amanda and the challenge to Katherine’s will.

Who do you think will kidnap Cane? Stay tuned to the CBS soap and don’t forget to check CDL often for the latest Young and the Restless spoilers, updates, and news.