BY Heather Hughes on August 31, 2019 | Comments: one comment
Related : Soap Opera, Spoiler, Television, The Young and the Restless 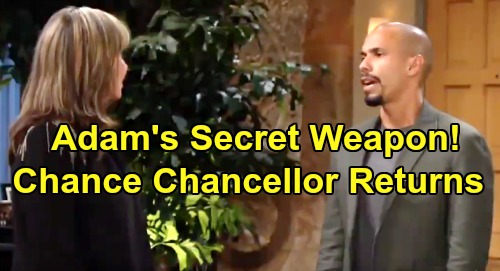 The Young and the Restless (Y&R) spoilers tease that Devon Hamilton (Bryton James) will attend an important meeting soon. He recently received a letter from an attorney about some discrepancies in the late Katherine Chancellor’s (Jeanne Cooper) will. The fortune Devon inherited could be at stake, so this could certainly turn his life upside down.

Devon’s meeting will confirm his worst fears. It turns out Katherine’s will is being contested, so The Young and the Restless spoilers say this should be a hot plot. Y&R fans can expect Devon to reevaluate things thanks to this big shocker. He’s used to living as a billionaire, so what happens if that’s stripped away?

Devon has plenty of businesses he’s running and he’s always starting new ventures. He loves being generous and granting people opportunities. Devon’s money is a huge part of who he is through that generosity alone.

This could easily lead to some issues with Elena Dawson (Brytni Sarpy), especially since Devon’s riches have already posed an obstacle. Devon paid off Elena’s student loans, which deeply offended her. She eventually understood that it was just a kind gesture, but she’s the kind of gal who likes to pay her own way.

Devon’s financial hit won’t make a difference in how Elena views or loves him. How he responds to the crisis, however, could certainly shake things up. If Devon lashes out over his sudden loss of funds, it could rattle Elena a bit. That could be dangerous since Elena’s been bonding with Nate Hastings (Sean Dominic). Some temptation could be on the horizon.

As purse strings are tightened, tough choices will have to be made and it could affect anyone tied to Devon. Plus, we’ve got the issue of who’s contesting this will. Who’s causing all the drama? Will this finally set up the Chance Chancellor recast the show’s been hinting at? If so, that could bring a whole different set of story opportunities.

Chance seems poised to be Adam Newman’s (Mark Grossman) secret weapon at some point. He owes Adam, and Phyllis Summers (Michelle Stafford) knows about their connection. Now that Adam and Phyllis are scheming again, Chance could be the third key player they need. The puzzle pieces seem to be falling into place here.