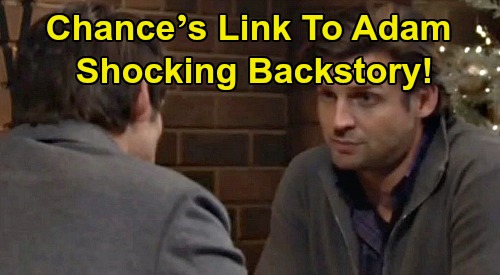 The Young and the Restless spoilers remind us that Chance Chancellor (Donny Boaz) was connected to Adam Newman (Mark Grossman) when they were in Las Vegas, Nevada. Y&R viewers have only been given minimal details about this link, but its existence raises a number of questions that must be answered.

Since Chance is known to have been working for the federal authorities during this decade, then how is it that he didn’t arrest Adam, who was wanted? Hardcore viewers know that the character Justin Hartley (Adam) was playing at the time escaped justice with Victor Newman’s (Eric Braeden) assistance in September 2016. While assumed dead, Chance would have (or should have?) been aware of who Adam was whenever they came into contact in Vegas.

Starting With The Cabin Blast Aftermath

It would likely be helpful to know how Adam and Chance came into contact after the cabin blast occurred. Did someone pull Adam from that wooded structure before the boom, or rescue him from the wreckage at a later point in time?

With however the above happened, how did Adam get onto the freight train that supposedly transported him to Nevada? From wherever he was apparently dropped off, how did he make his way to Las Vegas?

The Young and the Restless intentionally left this part of Adam’s comeback story unexplained. That’s fine, as daytime drama fans accept withheld facts in order to further a storyline. But they also expect details at a later point in time, which may be now.

So, Adam is said to have lost his memory as a result of Chloe Mitchell (Elizabeth Hendrickson) trying to end his life by rupturing the cabin’s gas line. He then survived the blast and later arrived in Nevada, where he established himself as a high stakes poker player.

Riza Thomas (Tina Casciani) became Adam’s handler. Was she working with the authorities and is that how the ‘Spider’ persona was born?

The implied oddness of Chance and Adam being involved and Boaz’ character not knowing who ‘Spider’ was seems highly unlikely. So maybe Adam was being used as an asset?

It doesn’t seem possible that memory loss was a cover. Adam appeared to not know who he was until Chloe took a shot at him at the tack house.

Neither Chance, nor Adam have denied Phyllis Summers’ (Michelle Stafford) accusations when she’s leveled them against both men. The Young and the Restless spoilers say Phyllis learned that they were connected and may know more than she’s already let on.

It’s reasonable to believe that if Victor hadn’t been tipped off to Adam’s existence, then the characters Grossman and Boaz are playing would have continued to work together, doing whatever it was they were doing. But Y&R not only recast Adam, decision-makers also recast Chance and then created a previously unknown link between them for some purposeful reason.

Viewers must be provided with more information to push the developing arc along. Here’s hoping Phyllis’ pressure makes that happen, or the truth spills out some how. Stick with the CBS soap and don’t forget to check CDL often for the latest Young and the Restless spoilers, updates and news.