The Young and the Restless Spoilers: Crazy Mia Sets Out To Ruin Abby’s Restaurant – Sabotage Plan In The Works

BY hellodrdavis on February 1, 2019 | Comments: one comment
Related : Soap Opera, Spoiler, Television, The Young and the Restless 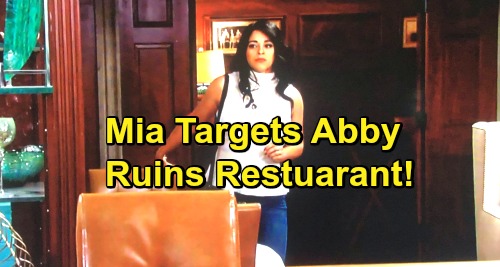 The Young and the Restless spoilers tease that Abby Newman (Melissa Ordway) will be making a very big effort where Mia Rosales (Noemi Gonzalez) is concerned. Abby doesn’t particularly like Mia, but she’s willing to give a friendship with Mia a chance for the sake of keeping the peace. Now that Abby and Arturo Rosales (Jason Canela) are engaged, Abby’s motivated to make nice with Mia.

Abby even brought Mia a peace offering after Mia got drunk and made a scene at Abby and Arturo’s engagement dinner. Mia doesn’t like Abby because Abby’s with Arturo, and Mia has a thing for Arturo herself. Even though Mia’s married to Rey Rosales (Jordi Vilasuso), she still feels a pull toward Arturo and doesn’t think that Abby could possibly make him happy.

Recently, Mia exhibited a bizarre fantasy where she dreamed of chopping Abby’s hair off. It seems that Mia is devolving and that she may be prone to acting out against Abby in the future. Sure, she could blatantly try to come between Abby and Arturo, but that would only cause immediate problems in her marriage and get Arturo all worked up.

But what if Mia decided to be a bit more subtle and go after Abby in another way? Abby’s got a personal project in development that’s her baby…the restaurant she’s opening with Devon Hamilton (Bryton James). It’s a major investment for Abby and her chance to prove herself as an entrepreneur.

What if Mia decides to go after Abby by doing something to sabotage her restaurant? It might not be too difficult to do, especially since Lola Rosales (Sasha Calle) will be chef at the new digs. It probably wouldn’t be beyond Mia to mess with the food just to ruin the experience for Abby.

Of course, if Mia decides to go this route, then Lola would probably initially be blamed for the problem, but knowing Mia, that would be just fine with her. Ultimately, though, the truth would come out about Mia’s involvement, but by then the damage to Abby’s restaurant would be done.

Do you think that Mia would go after Abby by sabotaging her new restaurant? Stay tuned to the CBS soap and don’t forget to check CDL often for the latest Young and the Restless spoilers, updates, and news.