BY Heather Hughes on October 25, 2019 | Comments: one comment
Related : Soap Opera, Spoiler, Television, The Young and the Restless 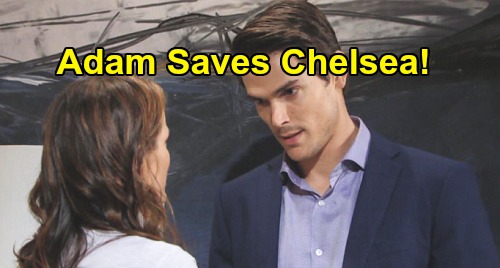 The Young and the Restless (Y&R) spoilers tease that danger is headed to Genoa City – and it’ll start with Simon Black (Jeffrey Vincent Parise), a mysterious face from Chelsea Newman’s (Melissa Claire Egan) past.

Y&R fans know Chelsea’s tried to get on a better path, but there are some things she may never escape. That includes her con artist history, which will leave her in more trouble than ever soon.

Simon will back Chelsea into a corner, which will force her to fall back on old habits. Chelsea will have to get down in the mud a bit here, but her priority will be protecting Connor Newman (Judah Mackey). She certainly doesn’t want Connor to be affected by any of this. The poor kid’s been through enough!

Chelsea won’t know if Connor could handle her landing behind bars. There may also be concerns about the risks to Connor himself. It’s easy to imagine Simon threatening Connor if Chelsea doesn’t pay up. This is obviously about money, so that’s where the washed cash will come in.

However, Kevin Fisher (Greg Rikaart) and Chloe Mitchell (Elizabeth Hendrickson) will go above and beyond to help their friend in need. That could be a problem since neither one of them can afford more legal issues.

All parties involved are on thin ice, but they’ll do what they have to do here. During the week of November 4-8, The Young and the Restless spoilers say Chloe and Kevin will go on an undercover mission. They may hope to learn some dirt on Simon and spin this situation in their favor. That sounds like something that could backfire if Simon figures out what they’re up to.

Will Adam Newman Step In And Save Chelsea Newman?

Y&R is building to a dangerous situation that’ll involve Adam Newman (Mark Grossman). He’ll get caught in this crisis, so that’ll definitely keep him in Chelsea’s orbit more and more. Nick Newman (Joshua Morrow) won’t approve, which could mean some jealousy will come into play. That’s especially true if Chelsea spills her secrets to Adam and leaves Nick in the dark.

This sounds like the perfect setup for Adam to be Chelsea’s hero. He may step in and save Chelsea, which could result in injuries if he’s not careful. Will Chelsea fear Connor could lose his father all over again? Since a “Chadam” reunion seems to be brewing, it makes sense to bring the family together like this. Perhaps we’ll see Chelsea’s feelings grow as Adam fights for his life in the hospital.