The Young and the Restless Spoilers: Delia Paints A Target On Adam’s Back – Billy Heads Down Dangerous, Violent Path 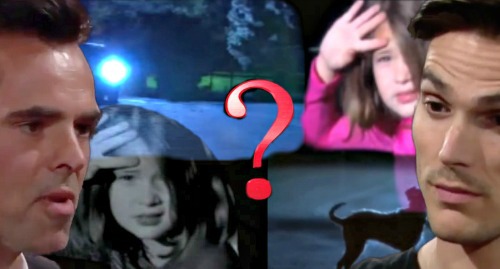 The Young and the Restless spoilers tease that Billy Abbott (Jason Thompson) is entering dangerous territory. As Y&R viewers know, he’s been in a terrible psychological state lately. He’s hasn’t been sleeping and has had several troubling episodes where he’s heard his deceased daughter Delia Abbott’s (Sophie Pollono) voice. Then there have been the incidents with Delia’s doll apparently stalking him and the strange writing on the wall at the Chancellor mansion.

As a result of all of this, Billy’s negative feelings toward Adam Newman (Mark Grossman) have grown. He’s been seeing the words “STOP ADAM” on the wall of the mansion, and now he’s finding himself growing excessively paranoid of Adam’s association with Michael Baldwin (Christian LeBlanc). Of course, Y&R viewers know that Michael and Adam do have a plot cooked up, but still Billy’s deep obsession over it isn’t healthy for him.

And recently, Billy has even grown angry and resentful toward his own family. He’s been quite unsettled about the merger between Abbott Exchange and Jabot, and he seems to be turning his anger toward Ashley Abbott (Eileen Davidson). He’s been obsessed with her past betrayal of the family and is certain that she’s going to do it again, even though there’s no evidence that Ashley is plotting to destroy the family or anyone else.

All of this is troubling enough, but Y&R spoilers indicate that Billy will be heading down a dangerous, violent path, as he lashes out toward his family some more and looks to get revenge. Of course, since the main person he’d be looking to get revenge against is Adam, then that could mean that Adam will be in danger, especially if Billy gets more “messages” from Delia about stopping Adam.

Other The Young and the Restless spoilers indicate that there will soon be a target on Adam, so none of this is sounding good for Billy’s psychological state. He’s tried talking with Sharon Newman (Sharon Case) and with a psychologist about his problems, but it hasn’t seemed to help much. He just keeps devolving and getting angrier, as he keeps thinking back to Delia’s “messages” and his bitterness toward Adam.

But is Billy just losing it and imagining all of these communications from Delia, or is someone behind it all? After all, it seems that Delia’s doll was actually put in Billy’s bed, unless he did it himself while he was in a sleepless haze. Could someone be gaslighting Billy to try to get him to go after Adam? It seems like a bit of a stretch that someone would be plotting so successfully to get Billy to devolve like he has, but it’s always possible.

One possibility is that Chloe Mitchell (Elizabeth Hendrickson) is behind it all, but it would mean that Chloe has been in town for quite a while and no one noticed – not even Kevin Fisher (Greg Rikaart), when he was in town. Plus, Chloe seemed to want Billy to refrain from getting revenge on Adam when she and Billy last spoke, so it doesn’t seem like she’d be simultaneously gaslighting Billy.

Could it be Kevin who was responsible for the strange writing on the wall and Delia’s doll showing up in strange places? It’s always possible, but then again, Kevin really seemed to care when Billy was upset over all the goings-on. And neither Kevin nor anyone else was responsible for Billy actually hearing Delia’s voice on several occasions and in several locations. That seemed to come directly from Billy’s mind.

It seems most likely that Billy is just having some serious psychological issues brought on by Adam’s re-emergence from the dead. But how far is he going to devolve into despair and anger? Could he actually try to kill Adam at some point?

Time will tell what happens here, but it seems clear that Billy needs help and he needs it now. Do you think that Billy’s problems are all the result of deep-seated psychological issues, or do you think someone’s gaslighting him? Will Adam wind up the victim of a delusional Billy Abbott? Stay tuned to the CBS soap and don’t forget to check CDL often for the latest Young and the Restless spoilers, updates, and news.