The Young and the Restless Spoilers: Eileen Davidson Back for Kristoff St. John Tribute – Ashley Returns to Mourn Neil’s Death 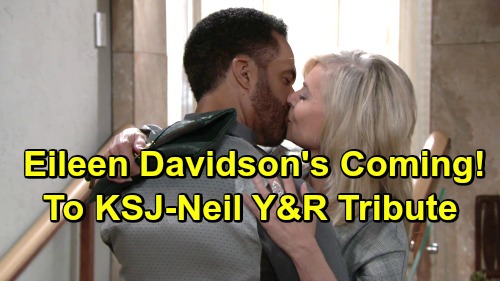 The Young and the Restless (Y&R) spoilers tease that Eileen Davidson’s latest return as Ashley Abbott will only last two episodes, but there’s another comeback stint ahead. In an interview with Soap Opera Digest, Davidson confirmed that she’ll be part of the upcoming tribute to Kristoff St. John and his character, Neil Winters. Ashley will be on hand to mourn this loss along with the rest of Genoa City.

“When I was initially contacted by Y&R, it was only supposed to be for a quick visit, but after Kristoff St. John’s passing, the show asked if I would participate in their plans to honor both Neil and Kristoff,” Davidson said. “Luckily, I was available, and I am honored to be included in those shows.”

Ashley and Neil had just barely started romance before she left to start My Beauty in Paris. They were able to shut things down before they ever really got started, but Neil’s death will still bring shock and heartbreak. Neil was a friend to Ashley and she’s definitely going to miss him. It’s great that Davidson was able to work what we can assume with be a funeral episode in her schedule.

Davidson will also be part of the retrospective episode that’s dedicated to St. John. He was known for being one of the kindest and most welcoming cast members, so plenty of costars will want to share their experiences. The Young and the Restless spoilers say the show will take a look back at some of Neil’s best moments, so we should get some fantastic flashbacks in this tearful tribute.

Neil’s exit storyline will begin on April 23 when the news of his devastating death hits. That’ll bring some of Neil’s loved ones home to grieve, so expect Ashley to be part of that group. After several episodes devoted to the character, the St. John tribute special will air on April 29.