BY hellodrdavis on October 17, 2019 | Comments: 2 comments
Related : Soap Opera, Spoiler, Television, The Young and the Restless 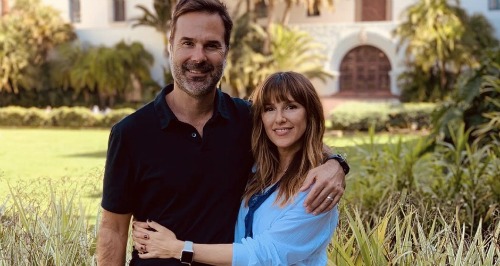 The Young and the Restless spoilers has some fun news to pass on about a popular Y&R star. As you may remember, Elizabeth Hendrickson, who portrays Chloe Mitchell on the CBS soap, got married this past summer. She and her husband, Rob Meder, were married in June on the island of Saint Barthelemy in a beautiful ceremony which she shared with her fans on Instagram.

Well, it seems that the happy couple recently got to have a second wedding ceremony. Because their wedding in Sant Barthelemy wasn’t legal in the US (which is the case with many destination weddings), Elizabeth and Rob had a second ceremony in California to make it “official.” They had the ceremony at the Santa Barbara County Courthouse, and it was quite the event.

Elizabeth shared a photo of her and Rob after the ceremony on her Instagram feed, along with a message saying that they finally made it official. She also shared an Instagram Story chronicling the ceremony which was completely awesome. The humorous montage of photos and videos shows how the ceremony went down.

You can watch Elizabeth’s Instagram Story by going to her feed, but suffice it to say that there were some seriously hilarious moments before and during the ceremony. For one, the officiant apparently forgot their appointment, which the couple took with stride.

Then, while they were saying their vows, a tourist attempted to take a video of the whole thing, and she kept inching closer and closer to the couple. That left Elizabeth with a case of the giggles and it was just a funny scene.

At any rate, it looks like it was a good day for Elizabeth and Rob, and they’ll have a memorable “official” wedding ceremony in addition to their beautiful destination wedding in Saint Barthelemy.

Several of Elizabeth’s followers have commented on her Instagram Story and her ceremony, with most offering their congratulations on the wedding and their amusement with the Instagram Story montage. For example, one follower wrote: “Congratulations! Gotta love your laugh and awesome attitude towards the other ‘witness’ taking a video of your ceremony.”

We send our congratulations to the Elizabeth and Rob and highly recommend that you check out her Instagram Story! Stay tuned to the CBS soap and don’t forget to check CDL often for the latest Young and the Restless spoilers, updates, and news.

We made it official today. Just like the Bieber’s, but better. Watch my story, officially the funniest wedding ever. 📸 @mikeramos1