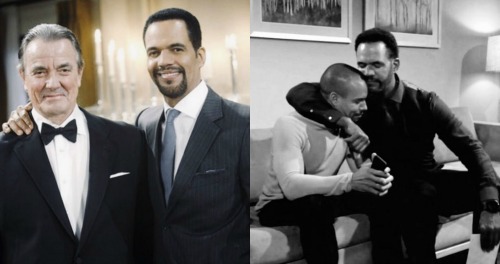 The Young and the Restless (Y&R) spoilers tease that the cast is feeling sentimental and emotional on Tuesday, July 16 as Kristoff St. John (Neil Winters) birthday passes. They flood social media to pay their respects and to wish the man a happy birthday even if he is no longer with us.

Eric Braeden, the actor who plays Victor Newman, was the first one to wish him a happy birthday this morning. He wrote on Instagram, “Today is your birthday, RIP, my brother.”

Michelle Stafford (Phyllis Abbott) was next on social media wishing her “incredible” friend a happy birthday. She hopes he’s found the peace he craved and he knows how much everyone misses him.

Then Daniel Goddard (Cane Ashby), Bryton James (Bryton James), and Christel Khalil (Lily Winters) wished him a happy birthday. They mention that they miss the Y&R legend daily and they hope he is watching over them.

St John’s fiancé, Kseniya Mikhaleva took to social media to say how much she missed Kristoff on this special day. She said that she is still trying o get her visa approved to visit his gravesite and to connect with St. John’s family.

The model mentions that in time, it will become clear that “some people” are just using Kristoff’s death as a way to profit from it. Many Y&R fans had an idea who she was pointing her finger at, but since Kseniya didn’t explicitly say, it’s best to leave that unsaid.

Kristoff died suddenly in February after a long battle with depression. In 2014, his son took his own life in a treatment center that was supposed to help him get a handle on his mental illness.

The Y&R cast and Kristoff’s loved ones miss him greatly. Even though he’s gone, they want to wish him a happy birthday and they hope he’s found the peace and happiness that he was so desperately searching. Don’t forget to come back to CDL later for more The Young and the Restless (Y&R) spoiler, news, and casting updates!

Today is your birthday, RIP, my Brother.

My Man… Happy Birthday to one of the Best this world had to offer.. Mr. @kristoffstjohn