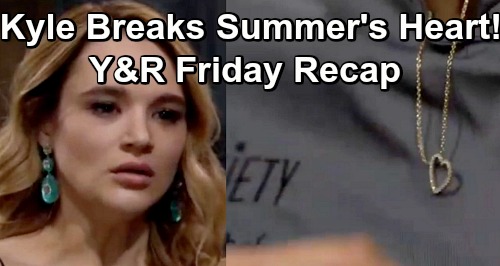 The Young and the Restless (Y&R) spoilers and recap for Friday, April 19, tease that Abby Newman (Melissa Ordway) and Lola Rosales (Sasha Calle) will be in crisis mode. They’ll both freak out when their restaurant launch preparations don’t go as planned. Abby will gripe at someone over the phone about the food delivery truck being late. A software glitch will leave Abby with another mess to clean up.

Abby will blow off Arturo Rosales (Jason Canela) since she’s got so much on her plate. He’ll turn his attention to his sister instead. Lola will have a meltdown about having the wrong fruit on hand, but Arturo will think she can improvise. Tessa Porter (Cait Fairbanks) will also help calm Lola down, so Lola will return the favor later.

After Tessa opens up about the brick and the threatening note, she’ll share her worries with Lola. Tessa will think Mariah Copeland’s (Camryn Grimes) more rattled than she’s letting on. She won’t know what she’d do if anything happened to Mariah, but Lola will offer reassurance.

Back with Arturo, he’ll help out with a fire alarm that’s gone haywire. Abby will notice and seem appreciative. They’ll share a nice moment until the power cuts off, but Arturo will be able to fix that as well. Abby won’t know if she can get past Arturo’s betrayal, but she’ll be truly grateful for his assistance.

At the Abbott mansion, Kyle Abbott (Michael Mealor) will hide a jewelry box from Summer Abbott (Hunter King). Once Summer talks Kyle into attending Abby’s restaurant opening, she’ll snoop and find a heart necklace. Summer will hint around and try to get Kyle to give it to her, but he won’t take the bait.

Y&R spoilers say Kyle will send Lola a text about his impending arrival. He’ll let her know he wouldn’t miss her big night. Soon after, Summer will appear and mention a present she got for Lola. Once they head to the restaurant, Kyle will steal a private moment with Lola and offer her the necklace. She’ll be thrilled as she dons it and tucks it under her chef uniform.

Next, Summer will witness Kyle and Lola looking too close for comfort. She’ll waltz over to give Lola a butcher knife as an opening night gift. That’s when Lola will pull the necklace out of her uniform and inadvertently expose Kyle’s not-so-smooth move. Naturally, Summer won’t be happy!

After giving the staff one last pep talk, Abby will announce that Society is open for business. Unfortunately, no one will be eager to get in. There won’t be anyone waiting outside, so Abby will grow concerned about this restaurant being a bust.

Other Young and the Restless spoilers say Cane Ashby (Daniel Goddard) will make a final pitch to Lily Ashby (Christel Khalil). He’ll want one more shot to save their marriage, but Lily will insist he has to let her go. They’ll keep debating, but Lily will stand her ground. Cane will eventually push Lily to at least stay the night at their place and attend Abby’s restaurant opening with him.