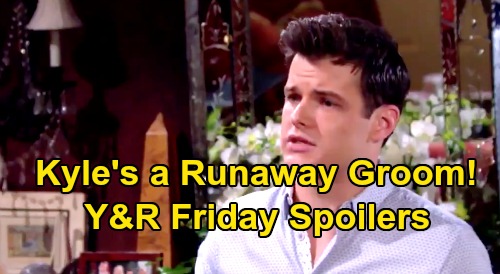 The Young and the Restless (Y&R) spoilers for Friday, August 16, tease that Kyle Abbott (Michael Mealor) and Lola Rosales (Sasha Calle) will get ready to become husband and wife. Their wedding day will kick off on an interesting note thanks to Theo Vanderway’s (Tyler Johnson) ominous text. Kyle will take one look at his former friend’s message and immediately grow concerned about what’s in store.

Theo will offer a reminder of the occasion and suggest that it’s Kyle’s big day. He’ll note that it’s the end of Kyle’s life as he knew it, so that’ll naturally leave Kyle on edge. Part of him will hope Theo just means the end of his partying bachelor days, which Kyle’s eager to distance himself from. However, this is Theo we’re talking about. He’s proven he likes stirring the pot, so Kyle will fear major trouble.

As a result, Kyle will let Theo get in his head. Y&R fans know Kyle’s made huge changes in his life since coming back to town. Meeting and falling for Lola played a role in that, but there are been other influences along the way. Kyle’s friendship with Mariah Copeland (Camryn Grimes), bond with Grandma Dina (Marla Adams) and connection to his dad, Jack Abbott (Peter Bergman), have also been important.

We’ve had a chance to see Kyle move away from his cocky, scheming side – not that he was that bad before! Still, Kyle definitely knows how to focus on others now. In his relationship with Lola, Kyle is trying to put her first and look to the future.

Of course, it’s a terrible idea to keep the secret about Zoe Hardisty (Anna Grace Barlow). She was an underage girl who drank too much at Kyle’s party with Theo and had to be rushed to the hospital. Kyle paid off Zoe’s dad to make sure the incident was brushed under the rug.

That seems like something Lola could easily get past if Kyle had sat her down and explained his remorse, but his deception could cost him. Lola feels like she’s got the full picture, but that’s just not true. On Friday, The Young and the Restless spoilers say Theo will get in Kyle’s head. Kyle will start to wonder if he’s really good enough for Lola, so a case of cold feet is coming up.

Kyle will disappear before his nuptials – much like he did just before his wedding to Summer Newman (Hunter King). The good news is Kyle will eventually show up to say “I do.” The bad news is Zoe’s headed to town and could make his life a nightmare.

It looks like the actual ceremony will go off without a hitch though, so look for Kyle and Lola to exchange some sweet vows. There’ll be more Young and the Restless wedding fun when Monday rolls around. We’ll give you updates as other Y&R details emerge. Stay tuned to the CBS soap and don’t forget to check CDL often for the latest Young and the Restless spoilers, updates and news.