BY hellodrdavis on August 16, 2019 | Comments: one comment
Related : Soap Opera, Spoiler, Television, The Young and the Restless 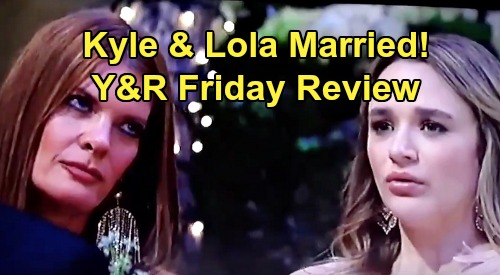 The Young and the Restless spoilers review for Friday, August 16, tease that preparations for the wedding of Kyle Abbott (Michael Mealor) and Lola Rosales (Sasha Calle) will get underway. Kyle will start out his day with an ominous text from Theo Vanderway (Tyler Johnson) saying that it’s the end of the world as Kyle knows it. That will rattle him a bit, and he’ll wind up getting some comfort from Traci Abbott (Beth Maitland) and Ashley Abbott (Eileen Davidson).

Of course, Kyle won’t share the Theo situation with his aunts, but he will share his thoughts as he’s freaking out from pre-wedding jitters. He’ll go on a rant about how divorce is in the Abbott DNA and how Lola deserves someone wonderful who will put her first and be there for her forever. Traci and Ashley will reassure Kyle that he’s that person, and they’ll get him back into a good state of mind.

Meanwhile, Mariah Copeland (Camryn Grimes), Tessa Porter (Cait Fairbanks), and Abby Newman (Melissa Ordway) will assist Lola as she gets ready for the wedding. The four friends will share some touching moments together, as Lola marvels at having three best friends. Mariah, Tessa, and Abby will give Lola something old, something new, something borrowed, and something blue in a fun wedding tradition.

Later, Rey Rosales (Jordi Vilasuso) will appear, and he and Lola will spend some quiet moments together. They’ll reminisce about their childhood, as Rey won’t believe it that his little Lola is all grown up and getting married. As they’re sitting and talking, Lola will hear a familiar voice call her name, and she’ll turn around to see her mom Celeste Rosales (Eva LaRue).

Celeste will quickly apologize to her daughter for her radio silence, and for planning to stay away from the wedding. Mother and daughter will hug and tear up in happiness as Lola thanks her mom for being there. Celeste will be so proud of her daughter and happy that she found a man who adores and celebrates her so much. Lola will be thrilled, and she’ll ask Celeste to walk her down the aisle along with Rey.

Finally, the wedding will get underway, as Rey and Celeste joyfully accompany Lola down the aisle. Summer Newman (Hunter King) and Phyllis Summers (Michelle Stafford) will be in attendance, but Summer will be determined to be on her best behavior, and she’ll end up sadly watching the ceremony without incident. But after Lola has joined Kyle at the altar, Celeste will quietly notice someone hovering nearby.

When Celeste slips away to investigate, she’ll see that the person is Lola and Rey’s father, Adrian Rosales. In a hushed voice, she’ll chastise him for showing up and tell him that he has a lot of nerve coming there. Adrian will reply that he just couldn’t miss his daughter’s wedding. Celeste will then tell Adrian that he’d better not ruin Lola’s wedding day, and she’ll slip back into the ceremony, as Rey gives her a sideways glance.

However, ongoing Y&R spoilers indicate that Adrian’s presence will ultimately be made known. Exactly how it happens remains to be seen, but Kyle and Lola will eventually become aware of his presence and Lola will ask to speak to her father alone. Chances are, this conversation won’t go well, given that Lola specifically requested that Adrian not attend. Y&R viewers will have to wait to see whether she softens and embraces his presence or asks him to leave.