BY Heather Hughes on January 24, 2019 | Comments: one comment
Related : Soap Opera, Spoiler, Television, The Young and the Restless 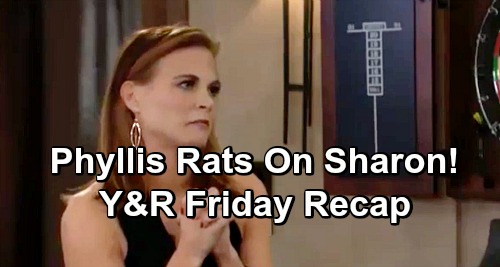 The Young and the Restless (Y&R) spoilers update and recap for Friday, January 25, tease that Cane Ashby (Daniel Goddard) will be left out of a trip to visit Lily Ashby (Christel Khalil). Neil Winters (Kristoff St. John) will admit that Lily told him about Cane’s kisses with Victoria Newman (Amelia Heinle). When Cane tries to defend himself, Neil won’t want to hear it. He’ll feel like Cane is never going to deserve Lily’s love.

Cane will put up a fight on being included in this trip, but Neil and Devon Hamilton (Bryton James) will fight right back. They’ll insist that from now on, Lily’s calling the shots. She’ll be the one who decides who she wants to see and when. Devon and Neil won’t be interested in helping Cane make amends.

At the vow renewal, Abby Newman (Melissa Ordway) will get over the shock and say yes to Arturo Rosales’ (Jason Canela) proposal. Kyle Abbott (Michael Mealor) will suggest turning this into a double wedding here and now. Of course, Abby won’t go for the idea. She’ll want to make sure her family’s around to watch her tie the knot, so they’ll hold off.

An annoyed Mia Rosales (Noemi Gonzalez) will make several attempts to regain everyone’s attention. She’ll hate that Arturo and Abby hogged the spotlight for a moment. Later, Mia will disrupt the newly engaged couple’s kiss and contend that it’s time for the best man’s toast.

After Arturo makes his speech, Mia will corner him in private. She’ll be convinced that Arturo doesn’t really want Abby and this whole engagement is just for show. Over with Jack Abbott (Peter Bergman), he’ll think Rey Rosales (Jordi Vilasuso) and Mia’s happiness is bittersweet. Jack will be glad some couples can still find bliss, but he won’t feel like he can find it with Kerry Johnson (Alice Hunter).

Kyle will wonder what the trouble is, so Jack will admit Kerry can’t seem to be honest. He’ll insist that he needs a woman he can trust. The Young and the Restless spoilers say Kyle will offer some good guidance. He’ll think Jack needs to get some answers from Kerry before he throws in the towel.

Jack will eventually track Kerry down to do just that. He’ll mention that Kerry wasn’t there when he stopped by the lab, so she’ll accuse him of trying to trap her. Jack will note that he just wants the truth. Kerry will brush off the incident as nothing and argue that she was just going to traffic court. She’ll claim she didn’t want to tell Jack about the unpaid parking tickets that had piled up.

Kerry will assure Jack that she’s very interested, so he’ll suggest he understands. However, Jack will look awfully concerned as he leaves. Over with Nick Newman (Joshua Morrow), he’ll confront Phyllis Summers (Gina Togoni) about her role in the cover-up. Phyllis will take issue with Nick’s tone. She’ll feel like she stepped up and saved the girls’ night gang with her quick-thinking.

Nick won’t buy that since Phyllis kept the fireplace poker. He’ll feel like she could easily be the one who framed Victor Newman (Eric Braeden), but Phyllis will continue to deny it. Phyllis will leave Sharon Newman (Sharon Case) out of it until Nick pushes too hard. He’ll rant about how he was going to let Phyllis be a mother to his children, so she’ll take some jabs at not-so-saintly Sharon.

Nick will be stunned to learn that Sharon’s been lying all this time, too. When Sharon was berating Nick over his secret at the wedding, she was keeping a huge one of her own. Y&R fans can expect a huge shouting match between Nick and Sharon next week.