The Young and the Restless Spoilers: Friday, May 10 – Sharon Comes Face to Face with Adam – Mia’s Arrested – Phyllis Confesses

BY Heather Hughes on May 9, 2019 | Comments: one comment
Related : Soap Opera, Spoiler, Television, The Young and the Restless 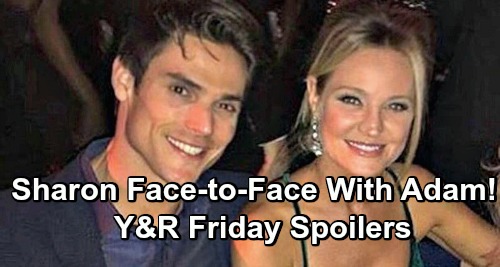 The Young and the Restless (Y&R) spoilers for Friday, May 10, tease that Sharon Newman (Sharon Case) will come face to face with her past. It sounds like she’ll finally get her first glimpse at back-from-the-dead Adam Newman (Mark Grossman). Sharon should look like she’s seen a ghost by the time this meeting arrives. She knew seeing Adam again would rattle her, but she couldn’t truly prepare for this.

Mark Grossman’s first official airdate is May 13, so Sharon may be the only one to see him for Friday’s cliffhanger. Then again, Y&R might throw in a shot of Adam for the audience at the end. Sometimes soaps don’t count that kind of thing as the first airdate. If it’s just a brief flash and there’s no dialogue, it’d make sense to still view Monday as new Adam’s real-deal first episode.

Regardless, Sharon will immediately feel a familiar, intense connection. She’ll want to help Adam, but she’ll soon realize this may be harder than she thought – for many reasons. Adam is stubborn for starters, but Sharon’s old feelings could get in the way, too. This is a complicated situation with complicated emotions behind it, so things will be tricky for “Shadam.”

Other Young and the Restless spoilers say Phyllis Summers (Gina Tognoni) will make a confession. Will she come clean to Summer Abbott (Hunter King) about using her Jabot password? Summer is a schemer like her mom, so she might understand. She’d still be miffed about it, but Summer would get over it quickly. She might even have some ways to help Phyllis’ achieve her goals.

Then again, Phyllis could get caught and confess because of it. Someone like Jack Abbott (Peter Bergman) or Lauren Baldwin (Tracey E. Bregman) could pry the truth out of Phyllis. She hacked Jabot’s servers, so that obviously wasn’t the best way to go about achieving her dreams. Nevertheless, Phyllis is desperate for a win here. She’ll do everything in her power to turn her life around and find success for once.

Meanwhile, Paul Williams (Doug Davidson) will corner Mia Rosales (Noemi Gonzalez). He’ll confront Mia about the attack on Lola Rosales (Sasha Calle), so there are a few options here. A Y&R preview video for this week shows Mia getting arrested, so we have to consider how that arrest might come about.

It’s possible Mia’s fears will get the best of her, which could lead to imagining the horror of her own arrest. If it’s not a fantasy, then Paul could simply uncover enough evidence to haul Mia in. Perhaps Abby Newman (Melissa Ordway) could help with that. On Thursday, Lola convinces Abby to keep quiet for a variety of reasons. However, there’s no guarantee Abby will keep her word.

Whatever the case, Lola could end up pushing for the charges to be dropped. No matter how all this plays out, Mia will have a real mess on her hands as her Young and the Restless stint winds down. We’ll give you updates as other Y&R news comes in. Stay tuned to the CBS soap and don’t forget to check CDL often for the latest Young and the Restless spoilers, updates, and news.