The Young and the Restless Spoilers: Is a Dylan McAvoy Recast Next – More Y&R Returns Ahead – The Truth Revealed 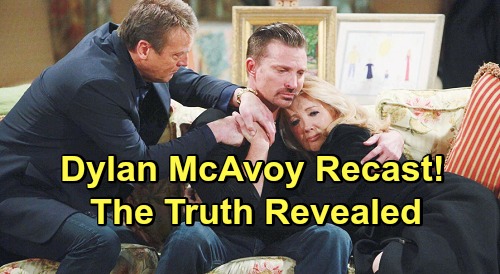 The Young and the Restless (Y&R) spoilers tease that more casting shakeups are in the works. Y&R has been bringing back several characters from the past, including Adam Newman (Mark Grossman), Chelsea Newman (Melissa Claire Egan), Kevin Fisher (Greg Rikaart) and Chloe Mitchell (Elizabeth Hendrickson). They also chose to give Gina Tognoni the boot and let Michelle Stafford return as Phyllis Summers.

Who’s next on the return list? Nothing’s been confirmed yet, but there’s been some buzz floating around about a Dylan McAvoy recast. Some Y&R fans have even suggested Dylan might be Chelsea’s new husband. After all, Dylan entered the witness protection program and could be anywhere. He was also married to Chelsea once before, so it’s possible they reconnected.

Dylan is the biological son of Nikki Newman (Melody Thomas Scott) and Paul Williams (Doug Davidson), so his return could give them some new material.

Son To Bond With Paul Williams

The Young and the Restless has been trying to feature Paul more since they brought him back. He’d have a son to bond with again if Dylan came home. Perhaps the threat to Dylan’s life could finally be eliminated and allow it.

Steve Burton’s busy playing the role Jason Morgan on General Hospital, which he’s perfect for. Most soap fans would agree that’s a much better fit for him since Jason is a memorable character who’s a crucial part of the GH canvas. Dylan, on the other hand, hasn’t been missed much in Genoa City.

Although Dylan was sweet, he was a pretty lackluster character. If Y&R does decide to bring Dylan back, they’ll need to find a good direction to go in or else it seems pointless.

Just because The Young and the Restless can bring Dylan back doesn’t mean they should. Of course, something short-term might be fun. As long as some solid drama’s involved, the show could convince us to come along for the ride.

However, it’s too early to say if a Dylan recast will actually happen since there is NO official word out yet – and that is the simple truth. It’s just worth considering since so many other blasts from the past are hitting town – and more are looming. The Young and the Restless spoilers say Adam’s comeback will remain the driving force behind some big stories, so stay tuned.

Do you think Y&R will bring in a Dylan McAvoy recast? Should they? Is Dylan needed on canvas or would you rather see other characters featured instead? We’ll give you updates as other news comes in. Stick with the CBS soap and don’t forget to check CDL often for the latest Young and the Restless spoilers, updates and news.