The Young and the Restless Spoilers: Lola Jealous of Summer Again – Kola’s Honeymoon Bliss Comes To An End

BY hellodrdavis on September 9, 2019 | Comments: one comment
Related : Soap Opera, Spoiler, Television, The Young and the Restless 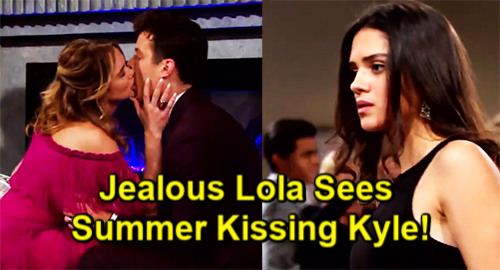 The Young and the Restless spoilers tease that Kyle Abbott (Michael Mealor) and Lola Abbott (Sasha Calle) have been enjoying their time as newlyweds. As a couple, “Kola” had a lot to overcome. As Y&R viewers will undoubtedly remember, Kyle was forced into a marriage with Summer Newman (Hunter King) in order to secure Summer as a liver donor for Lola. It was a big mess, but ultimately Kyle and Lola got back together and managed to get married in the wedding of the year.

Recently, Kyle and Lola have been in the “honeymoon” phase for sure. They’ve been enjoying each other, and they’ve even had fun in their apartment with every conceivable appliance going on the fritz. But soon, the newness of everything is going to wear off, and reality will set in. Plus, there are a couple things that will put a damper on their honeymoon bliss.

First off, there’s Theo Vanderway (Tyler Johnson) and his constant needling of Kyle. Unbelievably, Kyle’s still harboring a secret from Lola about the incident in his past with Theo and Zoe Hardisty (Anna Grace Barlow). As Y&R viewers know, Theo and Kyle dumped a then-underage Zoe off at the ER after she drank too much, and then Kyle later paid off her father. At some point, that secret’s bound to cause issues for Kola.

Lola Rosales Witnesses Something That Gives Her Serious Pause

But before that can happen, something else will transpire that will lead Lola to get the jealousy bug once again. As Y&R viewers know, Lola has come a long way lately when it comes to Summer. She’s no longer worried about Summer being a threat to her relationship with Kyle. In fact, the whole love triangle issue seems to be long behind them.

In fact, Lola doesn’t even seem to have a problem with Kyle and Summer working closely together at Jabot. Now that Kyle is Interim CEO, he’s recruited Summer to work closely with him, and that’s been just fine with Lola. She trusts Kyle, and she even seems to trust Summer. But soon she’ll witness something that will give her serious pause. The scenario will be The Grand Phoenix opening, and she’ll get an eyeful of Kyle and Summer kissing.

Now, how this all comes about will be quite strange. According to Y&R spoilers, Zoe will spike the drinks at The Grand Phoenix opening with some sort of drug. Summer will partake of the drugged drinks, and she’ll get loopy, and in a moment alone with Kyle, she will tell him she misses him and proceed to plant a big kiss on him. Kyle will be stunned, but not as stunned as Lola, who will see the whole thing unfold.

It seems that neither Lola nor Kyle will have partaken of the spiked drinks, so neither of them will find Summer’s actions acceptable nor funny. But for Lola, she’ll probably be wondering why Kyle would even let things get as far as a kiss – after all, he could have pushed Summer away. It looks like it’s going to be a big issue for the couple, and it will likely have some serious implications.

After the kiss, Lola probably won’t want Summer and Kyle working together so closely going forward. She’ll probably argue that even though Summer was drugged, the drugs likely brought out Summer’s true feelings about Kyle. And she won’t want Kyle to be hanging out with someone who’s still hung up on him deep down.

At any rate, it looks like the honeymoon will be suddenly over for Kola, as they suddenly have to deal with some big, unpleasant realities. Of course, it remains to be seen when and if Lola will learn about Kyle’s Zoe secret, and when that comes out, look for some more newlywed angst.

Do you think that Lola will forbid Kyle to work with Summer now? Stay tuned to the CBS soap and don’t forget to check CDL often for the latest Young and the Restless spoilers, updates, and news.

It’s the party of the year with a wicked twist. ✨ Things get out of control this week on #YR! pic.twitter.com/RTASMRsqm5