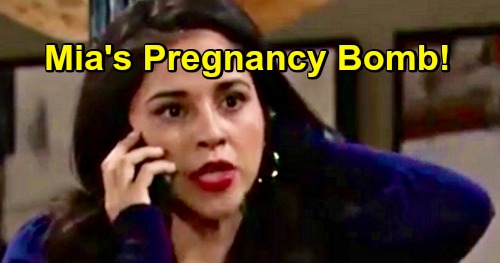 The Young and the Restless (Y&R) spoilers tease that Rey Rosales (Jordi Vilasuso) and Sharon Newman (Sharon Case) are so close to a future together. Unfortunately, a couple of obstacles are still standing in their way. The road to romance certainly won’t be bump-free for these two.

Mia Rosales (Noemi Gonzalez) was a hurdle until she accidentally blurted out Arturo Rosales’ (Jason Canela) name during a passionate moment. That gave Rey the sign he needed to bail on Mia and pursue a relationship with Sharon. However, Sharon’s lies could cause a mini setback. Rey has always been suspicious of Sharon, but there was a part of him that trusted her, too.

Nevertheless, Sharon had a good reason for keeping her mouth shut about the night J.T. Hellstrom (Thad Luckinbill) died. The part of Rey that trusts Sharon could actually come in handy here. Sharon wouldn’t have stayed silent if Nikki Newman (Melody Thomas Scott) was a cold-blooded killer. She couldn’t have stood by and left Rey in the dark if a true murder had taken place.

Rey may be angry about Sharon’s deception, but he should soften once he processes everything. Nikki didn’t have time to think when she spotted Victoria Newman (Amelia Heinle) facing J.T.’s attack. She just knew she had to protect her daughter. Sharon may push Rey to admit he’d do the same if someone went after his sister, Lola Rosales (Sasha Calle). Rey would certain kill a man to protect her.

Since Rey suspected there was more to the story, Sharon’s dishonesty is probably just a small stumbling block. The much larger one could involve Rey’s wife, Mia. She definitely won’t approve once Sharon and Rey kick off their romance. Even though Mia has seemed more interested in Arturo Rosales (Jason Canela) lately, she may circle back to Rey if Arturo doesn’t bite.

What can Mia do to sabotage “Shey” and pull Rey back into her orbit? Y&R has already provided some major clues about what might be in store. Back on October 19, Rey admitted to Sharon that he always wanted to be the kind of dad he never had. He suggested that Mia didn’t want kids, but Sharon argued that sometimes people change their minds.

On December 14, Sharon noted that it was a pity Rey didn’t have children. She assured Rey that he’d be a great father, which earned a smile and perhaps a look of longing. It’s clear that Rey would love to have some little Rosales kiddos running around. Will Mia catch Rey off guard by revealing that she’s pregnant? Even if she’s lying, it’d the perfect opportunity to leave Rey torn once more.

The Young and the Restless spoilers say the show may have used the kid theme as a big hint. It could be the only way Rey would even consider going back to Mia. She may know that and fake a pregnancy. Then again, Mia might genuinely get lucky and find out she’s got Rey’s bun in the oven.