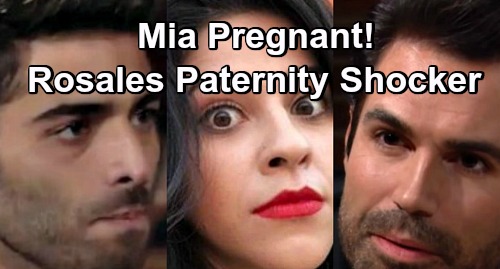 The Young and the Restless (Y&R) spoilers tease that Mia (Noemi Gonzales) could become pregnant after a night of passion with Arturo (Jason Canela). Naturally this could lead to a rather intense paternity scandal since Mia is also sleeping with Rey (Jordi Vilasuso).

Since arriving in Genoa City, Mia has caused drama with the Rosales family. She came to town in hopes of reconciling with her estranged husband, who was now getting very friendly with Sharon (Sharon Case), much to Mia’s chagrin.

It was soon revealed that the reason their marriage ended was due to her affair with Rey’s brother Arturo. After the revelation was made, Abby (Melissa Ordway) began to have doubts about her relationship with Arturo. Yet, he assured Abby she was the only woman for him, and Abby warned Mia to back off.

As for Rey, he ended his budding romance with Sharon and decided to work on his marriage. It looked like things had settled down for the Rosales family with Rey and Mia back together, and the brothers were on friendly terms.

However, Rey’s friendship with Sharon continues to cause worry with Mia, who is seeking comfort from Arturo. That comfort could eventually lead to a night of passion, which will end up with Mia becoming pregnant and not knowing who the father is.

If Mia does become pregnant odds are she’ll try to pass the baby off as Rey’s, but Arturo won’t like it. If Arturo suspects the baby is his, he’ll want be part of the child’s life, which will have Mia panicking.

A who’s the daddy story is going to create a lot more drama for the Rosales clan as the paternity scandal blows up. When Rey discovers the truth, this will have him and Arturo fighting again. It’ll also bring into question, who does Mia love more. She claims she loves Rey, but has been flirting with Arturo, leading fans to believe her heart belongs with him.

Do you think Mia will become pregnant? If so, will Rey or Arturo be the father? And how will this paternity bombshell affect Arturo’s relationship with Abby? Probably not very well!