BY Heather Hughes on September 19, 2019 | Comments: one comment
Related : Soap Opera, Spoiler, Television, The Young and the Restless 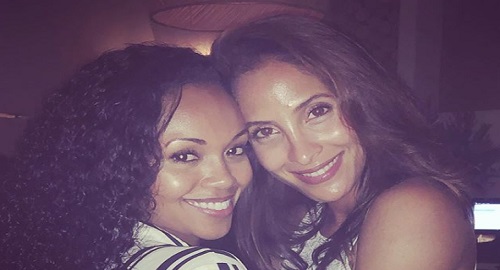 The Young and the Restless (Y&R) spoilers reveal that Mishael Morgan (ex-Hilary Hamilton) is finally back in the action. The catch is she’s playing a brand-new character! There’s been buzz over Morgan’s return for months, but it’s awesome to see it’s actually happening. It looks like Morgan has fun stuff brewing in a role that’s been speculated about: a lawyer named Amanda Sinclair.

However, big things have been happening behind the scenes as well. On September 16, The Young and the Restless cast gathered to shoot a new cast photo. Everyone was all glammed up, so plenty of cast members were sharing their outfits in Instagram stories. Daniel Goddard (Cane Ashby) also posted an Instagram video showing off Christel Khalil’s (Lily Winters) parking spot. Khalil herself posted a shot of the studio, so we know she was in the cast photo.

Of course, that makes sense considering Khalil is officially a recurring player. She’s been on board with reappearing from time to time, so it’s wise to include her as part of this group – especially since she’ll play a role in what’s ahead with Morgan’s new character.

Morgan posted a pic with Khalil on her own Instagram account, which indicated these friends reunited in Los Angeles. They should be reunited on screen eventually, too. The Young and the Restless spoilers say Lily will pop up at some point. It should be great to witness Lily’s reaction to this wild doppelganger. Perhaps she can help Devon process any complicated feelings that emerge.

Whatever the case, it was lovely to see Khalil and Morgan together again on social media. Morgan also posted a cute shot from a night out with Khalil, James and some friends. It’s always exciting when soap stars share what’s happening off set! Let’s hope for more behind-the-scenes content now that Morgan’s comeback has been confirmed.

From Toronto to LA to Toronto and back; Some friendships know no limits! So glad I’m in this snow globe with you 😘❤️ #besties #losangeles #reunited @christeladnana