The Young and the Restless Spoilers: Mishael Morgan Returns To Y&R in New Role – Back as Another Character, Not Hilary? 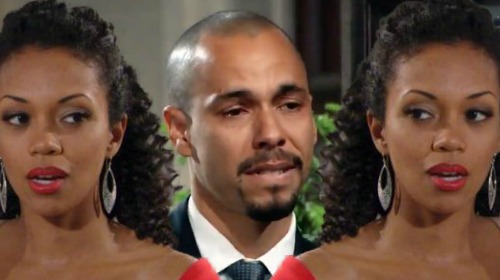 The Young and the Restless (Y&R) spoilers tease that a popular actress could be poised for a big comeback. According to TV Source, there’s buzz about Mishael Morgan’s (Hilary Hamilton) return as more than just an apparition. Hilary’s been busy spooking Devon Hamilton (Bryton James) with all these ghostly appearances, but they’re hearing that Morgan has been hired for a real role.

However, it seems Morgan may be playing someone other than Hilary this time around. Y&R fans know Hilary died in Devon’s arms at the hospital. They may have opted to skip coming up with a crazy explanation for her return. Days of Our Lives isn’t afraid to bring every character under the sun back from the dead, but The Young and the Restless likes to be a bit choosier.

That’s especially true if the character is dead-dead and not presumed dead like Adam Newman (Mark Grossman) was. They also did J.T. Hellstrom’s (Thad Luckinbill) back-from-the-dead story not too long ago. Although viewers were already in the loop on Chloe Mitchell’s (Elizabeth Hendrickson) survival, Michael Baldwin (Christian LeBlanc) just found out and the secret could really blow up if it spreads.

At some point, soap deaths can become meaningless and Y&R may have wanted to avoid that. They certainly could’ve cooked up some wild excuse, but maybe it’d be easier to come up with a wild excuse for a doppelganger. Perhaps Hilary has a secret twin sister who will suddenly show up and rock Devon’s world.

Then again, Devon could be shaken by somebody with an eerie resemblance to Hilary. He might become obsessed with someone new in town simply because she looks like his dead wife. Of course, the idea of Morgan playing a different character may be disappointing to many fans. Hilary added a lot to the show with her sneaky strategies and powerful personality.

Any character Morgan’s portraying will have to be exciting and bold. We’ve got the sweet side covered with Elena Dawson (Brytni Sarpy), so Morgan’s role needs to bring the spice. Will Y&R pair Morgan’s character up with Devon? Will Elena have to find someone else to fall for? These are some great questions to ponder as we wait for official word on this comeback.

There’s no confirmation yet, but The Young and the Restless spoilers say more returns are definitely brewing. Mishael Morgan could easily one of them if this buzz proves correct. After all, viewers have been clamoring for her since she left! We’ll give you updates as other Y&R news comes in. Stay tuned to the CBS soap and don’t forget to check CDL often for the latest Young and the Restless spoilers, updates and news.