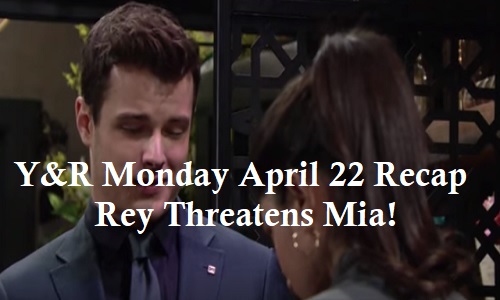 The Young and the Restless (Y&R) spoilers for Monday, April 22, tease that Abby Newman (Melissa Ordway) will be relieved when guests finally arrive for Society’s opening night. She’ll be especially excited to learn Devon Hamilton’s (Bryton James) bringing a date. Nick Newman (Joshua Morrow) and Jack Abbott (Peter Bergman) will also show up to give Abby their full support.

Meanwhile, Lola Rosales (Sasha Calle) will once again prove to be a terrible gift recipient. She’ll insist it’s bad luck to give someone a knife without a coin to go with it, so Summer Abbott (Hunter King) will hand over a quarter. Y&R spoilers say Summer will compliment Lola’s necklace – the one she knows Kyle Abbott (Michael Mealor) gave her – as she saunters off with her hubby.

Summer will try to get Kyle’s mind off Lola, so they’ll head over to chat with her dad. Nick will note that he’s eager to discuss house blueprints with the newlyweds. Over with Rey Rosales (Jordi Vilasuso) and Arturo Rosales (Jason Canela), they’ll get a warning from Lola. She’ll understand that there’s tension between her brothers at the moment, but she’ll want everyone to get along tonight.

Out front, Mia Rosales (Noemi Gonzalez) will gripe at the doorman. She’ll argue that she’s supposed to be on the list, but she’ll be turned away. At Devon’s penthouse, Ana Hamilton (Loren Lott) will get a pre-performance pep talk from Jett Slade (Gilbert Glenn Brown). Devon will also take off his wedding ring, put it away for safekeeping and greet Elena Dawson (Brytni Sarpy) for their date.

Other Young and the Restless spoilers state that Jack will get some infuriating news. At the restaurant opening, Ashley Abbott (Eileen Davidson) will inform her brother that she scooped up Jabot’s receptionist, Ted. Jack will complain and insist that Ted had better not divulge any company secrets.

Ashley will have Ted promote Jack of Hearts at the event, but she’ll take time to congratulate Abby as well. After Jett takes the stage with Ana, Jack will highlight Jabot Collective with a new ad. When Devon and Abby see it on the screen, they’ll scold both Jack and Ashley for using Society as their battleground.

Later, Lola will be introduced to the crowd. She’ll be grateful to the people who have supported her, including lifesaver Summer. Over with Kyle, he won’t be able to resist stealing a kiss from Lola in the back. The Young and the Restless spoilers say Nick will catch them and demand an annulment, but Summer won’t have it. She’ll be determined to make things work with Kyle.

At the bar, Mia will manage to sneak in and flirt with Jack a bit. He’ll be uncomfortable, so he’ll make a getaway as soon as he can. Arturo will also drop the pregnancy bomb on Abby, so she’ll be livid when she realizes it might be his child. She’ll want both Mia and Arturo out of her restaurant.

Back with Ashley, she’ll let Jack know that she returned his money and intends to proceed with her own clothing-centric line called Abbott Exchange. Nearby, a lovesick Lola will spot Kyle heading for the exit with Summer. Once Mia returns to her suite, Rey will join her there to make a threat. He’ll insist that Mia had better start focusing on the baby or else this kid will be born in prison.