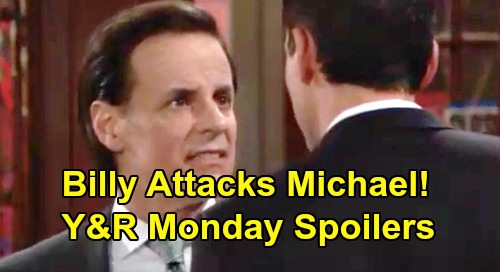 The Young and the Restless (Y&R) spoilers for Monday, August 19, tease that Billy Abbott’s (Jason Thompson) issues will just keep getting worse. His nightmares and hallucinations are haunting him, so there’s only so much one man can take. Adam Newman’s (Mark Grossman) return sent Billy down a dark path, and now he’s set to spiral out of control.

Billy has been a mess thanks to grief over Delia Abbott’s (Sophie Pollono) death. He really thought he’d worked through the intense pain and moved on, but it’s back with a vengeance. Y&R fans can expect Billy to lash out on Monday. His rage will build until he finally explodes, so the major meltdown will leave some Genoa City residents concerned.

Michael Baldwin (Christian LeBlanc) will be on the receiving end of Billy’s wrath. Billy will smell two rats since Michael is clearly working with Adam on the downlow. He’ll toss around some insults and threats, but he probably won’t stop there.

Billy will likely exhibit troubling behavior in front of Victoria Newman (Amelia Heinle) as well. She may realize her almost husband is suffering even more than she thought. Monday’s episode will definitely bring a few Billy bombshells, so stay tuned to see how his loved ones handle them.

At Kyle Abbott (Michael Mealor) and Lola Rosales’ (Sasha Calle) wedding reception, their blissful bubble will burst. Lola will have to deal with her father’s surprise appearance, so that’ll shake things up for her. She’ll realize Adrian Rosales watched her nuptials out of sight, so she’ll talk through her problems with her dad and possibly reach an understanding.

As for Kyle, he’ll face off with Theo Vanderway (Tyler Johnson). Theo’s plus one will be Zoe Hardisty (Anna Grace Barlow), the girl at the center of the infamous New York story. Kyle will warn Theo to get Zoe out of there and keep his mouth shut. He’ll be desperate to avoid a disastrous revelation that could blow up his world.

Other Young and the Restless spoilers say Arturo Rosales (Jason Canela) will be back on the scene. His apology to Abby Newman (Melissa Ordway) will be interrupted when Nate Hastings (Sean Dominic) appears. Nate won’t want Arturo bothering the maid of honor, so he may suggest Abby’s ex should move things along.

Of course, there’ll be plenty of wide-eyed wedding guests to watch the confrontations. Perhaps some other characters will step up as peacemakers and comforters. Regardless, everyone should need a drink or two after all the madness!