The Young and the Restless Spoilers: Monday, November 11 Review – Chance Not Connected To Katherine’s Will – Simon Takes Hostages – Chelsea Panics

BY Heather Hughes on November 11, 2019 | Comments: one comment
Related : Soap Opera, Spoiler, Television, The Young and the Restless 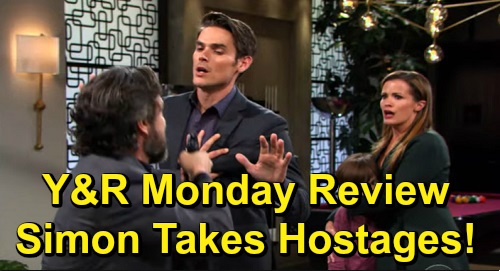 The Young and the Restless spoilers review for Monday, November 11, tease that Cane Ashby (Daniel Goddard) will demand to know why Chance Chancellor (Donny Boaz) has just burst into Amanda Sinclair’s (Mishael Morgan) room and hit him. Chance will be peeved that Cane screwed Devon Hamilton (Bryton James) out of $2 billion and say that he’s never met Amanda in his life.

The men will shout at each other, and they’ll establish that Chance has tried to talk with Jill Abbott (Jess Walton) recently, but she wasn’t chatty, and Chance will think that Jill and Cane are in cahoots to scam Devon. Cane will run down everything that’s happened with Katherine Chancellor’s (Jeanne Cooper) will, including that Jill has gone off to investigate whether Colin Atkinson (Tristan Rogers) set the whole thing up.

Cane will be peeved in his own right, saying that Chance could have come back and cleared this whole mess up months ago, but Chance will say that he’s been busy on a case, and that he’s not going to apologize to Cane for belting him until he knows that Cane’s clean. Chance will then get a text from another agent who’s down in the lobby saying that the subject is in the hotel.

Down in the lobby, Simon Black (Jeffrey Vincent Parise) will have just entered, and Chance and the lobby agent will agree via text that they’ll apprehend him when he leaves the building. Simon will approach Nick Newman (Joshua Morrow) in the lobby and engage in small talk with him about the upcoming election. Simon will remark that he hopes Nick has a good woman in his corner.

Next, Amanda will return to her room to find Phyllis Summers (Michelle Stafford) in the corridor outside her room. When Amanda opens the door, she and Phyllis will notice Chance in her room. Amanda will wonder who he is, and Phyllis will immediately recognize him as Chance. Chance will say, “You must be my lawyer, nice to meet you” to Amanda, who will wonder what’s going on in her suite. Chance will then declare her room as ground zero for a federal sting operation, which will immediately interest Phyllis.

Meanwhile, down in the lobby, Chelsea Lawson (Melissa Claire Egan) will be horrified to see Adam Newman (Mark Grossman) and Connor Newman (Judah Mackey) arrive on their way out of town. Connor will beg his mom to come with him and Adam to the Kansas farm, and Chelsea will frantically tell Adam that they need to leave the premises now. Adam will send Connor to a nearby chair, and he’ll question Chelsea about what’s going on.

At that moment, Simon will lurk nearby, and Adam will notice Chelsea noticing Simon. Adam will ask who “that guy” is, and Simon will approach them both, wanting to talk to Chelsea. Adam will tell Simon gruffly that it can wait, and Simon will walk off and happen to notice the Federal agent at the bar…and his gun. Adam will continue to quiz Chelsea, who will tell Adam to take Connor and go, when Simon approaches again.

Simon will address Chelsea directly and tell her that he sees her little boy in the lobby, which will alarm Adam. Simon will then grab Chelsea and try to pull her away, which will cause Adam to manhandle Simon, who will then back up and expose his holstered gun at his side. He’ll note that he’s aware of the agents in the building, and he’ll order everyone out of the lobby but Abby Newman (Melissa Ordway), Chelsea, and Connor. Adam will announce that he’s staying.

Meanwhile, up in Amanda’s room, she’ll want to talk to Chance about Katherine’s will, figuring that he’d want to know why someone was impersonating him. But Chance will say that he’s got more important things to worry about now, and he’ll end up getting an assist by Phyllis, who will offer to let him see her security surveillance system in her room.

Back in the lobby, Abby will shoo the guests out of the lobby, leaving herself, Simon, Adam, Chelsea, and Connor alone in the lobby, with the whereabouts of the agent who was previously in the lobby unknown. Simon will order Abby to lock the front doors, which she’ll do before moving toward the panic button behind the bar.

Adam will tell Simon to think about what he’s doing, and Simon will say that he just came to Genoa City to collect something that belongs to him, and that he’s going to bypass going to jail. Connor will cower behind Chelsea, as Adam stands his ground and Simon backs up, clearly looking for way out of the building.

Of course, given that things have gone this far, Chelsea’s actions – including holding onto Calvin Boudreau’s (John Burke) dirty money and engaging in money laundering – are certainly going to come to light. This will surely have serious implications for Chelsea’s relationships with both Nick and Adam…and possibly with Connor. We’ll see what happens with the fallout from this turn of events, but it’s possible that Adam could use all of this against Chelsea to gain custody of Connor.

And for Nick, the fallout for his political campaign could be disastrous. Nick could be pretty well out of the race before it really even begins, thanks to the negative press that the standoff at the hotel will surely garner. It should end up being a real mess for Chelsea.