BY Heather Hughes on September 20, 2019 | Comments: one comment
Related : Soap Opera, Spoiler, Television, The Young and the Restless 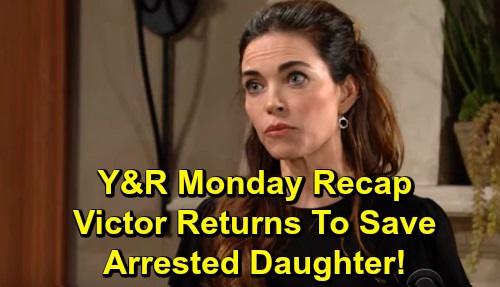 The Young and the Restless (Y&R) spoilers recap for Monday, September 23, teases that Victoria Newman (Amelia Heinle) will fret over the evidence against her. Billy Abbott (Jason Thompson) will get updates along with Nikki Newman (Melody Thomas Scott) and immediately insist Adam Newman (Mark Grossman) framed Victoria. Victoria will talk about Adam’s willingness to let Victor Newman (Eric Braeden) die as Jack Abbott (Peter Bergman) appears and sticks up for his friend.

After Victoria argues that Adam’s a different man now, Jack will contend that they should leave this to the authorities. He’ll feel the cops can decide if someone murdered Victor. At Adam’s penthouse, he’ll berate Michael Baldwin (Christian LeBlanc) since no arrest has been made yet. Michael will gripe about the lack of motive, but Adam will push him to get it done.

At Nick Newman’s (Joshua Morrow) house, Chelsea Newman (Melissa Claire Egan) will talk to him about Connor Newman (Judah Mackey). Chelsea won’t think she can keep Adam away from Connor for much longer. She’ll also be concerned about Victor’s passing and how Connor will take it. Chelsea won’t want to believe Connor’s dad is behind his grandpa’s death, but she’ll definitely worry about the possibility.

Nick will insist Adam’s indeed to blame and should be in jail. This whole mess will make Chelsea want to take off with Connor, but she’ll assure Nick she intends to stick around. After Adam’s call comes in, Chelsea will take Connor to see his father in the park. Adam will be glad to be with the only family he has left, so Chelsea will show him some sympathy over his Newman exiling.

Y&R spoilers say Chelsea will watch Adam bond with Connor before the kid dashes off to get ice cream. Once they’re alone, Adam will suggest he wants to be part of breaking the bad news about Victor. He’ll rant about Nick’s med tampering accusations, but Chelsea won’t be sure of anything at this point. After Connor scampers back over, Adam will let him know his grandpa died.

At Devon Hamilton’s (Bryton James) penthouse, he’ll tell Elena Dawson (Brytni Sarpy) about Chance Chancellor’s claims. Devon will stand by the will as Katherine Chancellor’s (Jeanne Cooper) own words and refuse to let Chance tarnish her legacy. Elena will be surprised when she hears exactly how much money Devon inherited, but she’ll be impressed with all the good he’s done with it.

Devon will decide he can’t let Chance and Amanda Sinclair (Mishael Morgan) have the next move. Once he exits, Elena will speak with Nate Hastings (Sean Dominic) about Victor’s demise. He’ll admit he’s still trying to process everything. At the coffeehouse, Amanda will leave someone a voicemail and grumble about her calls being dodged. She’ll contend that she needs to hear back before she can move forward.

Over with Lauren Baldwin (Tracey E. Bregman), she’ll be back from getting Fenmore “Fen” Baldwin (Zach Tinker) settled in rehab. Lauren will be fed up with Adam’s manipulation and so will Michael, but he won’t want her becoming a target in all this. Nevertheless, Lauren will refuse to cower in fear. She’ll find out about Adam’s plan to charge Victoria with Victor’s murder and realize Adam’s framing her for his actions.

The Young and the Restless spoilers say Michael will be faced with a choice. He’ll know how he’s going to handle this. At Society, Nick will talk to Nikki, Billy and Victoria. He’ll feel like this is the Newman war Adam declared, so they have to be ready for whatever he throws at them. Soon after, Rey will arrive with a warrant for Victoria’s arrest. Despite the protests around the table, Victoria will be handcuffed and read her rights.

Back at the ranch, Nikki will be frantic on the phone. She’ll insist something terrible has happened and add that it’s all gone wrong. Moments later, Victor will walk in the living room. At the Grand Phoenix, Devon will give Jill Abbott (Jess Walton) the scoop on Amanda being a Hilary Hamilton (Mishael Morgan) lookalike. He’ll also bring Jill up to speed on Chance’s claims, but she’ll suspect Amanda herself is behind this.

After Devon spots Amanda, he’ll approach her and spark some clashing. Devon won’t buy that Amanda had no knowledge of the doppelganger situation. He’ll want Amanda to steer clear of the people he cares about, but she’ll insist she doesn’t take orders from anybody. Devon will warn that he can pay for better lawyers with his billions, but Amanda won’t think he’ll have those billons for long.

Once she’s alone, Amanda will call her secret partner again. She’ll argue that the clock is ticking. Nothing can happen until Amanda hears from this person, so it’s urgent that he or she gets in touch. The Young and the Restless spoilers say some hot drama’s ahead in Genoa City. We’ll keep you posted as other Y&R details emerge. Stay tuned to the CBS soap and don’t forget to check CDL often for the latest Young and the Restless spoilers, updates and news.