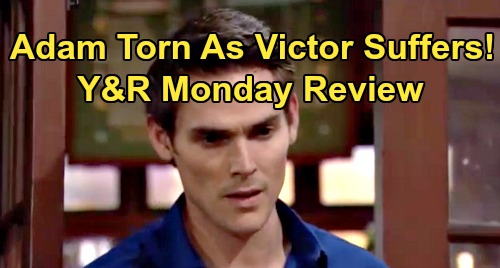 The Young and the Restless spoilers review for Monday, September 9, tease that Victor Newman (Eric Braeden) will be feeling a little off as he and Nikki Newman (Melody Thomas Scott) spend the day together. Over coffee at Crimson Lights, Nikki will think that they should go home and rest before The Grand Phoenix opening later that night.

After a while, Victor will have a moment of weakness and will have difficulty standing up. Worried, Nikki will run to get him some water and Adam Newman (Mark Grossman) will notice and follow her over to Victor. Interestingly, Adam will look genuinely upset and worried about Victor. Nikki will tell Adam that this was all brought on by his visit to the ranch, and Adam will tell his father that he’s sorry he’s not feeling well before leaving.

Across the room, Phyllis Summers (Michelle Stafford) will talk with Adam and think that the meds took effect awfully quickly, and she’ll wonder whether Adam is ok with what he’s done. Adam will snap back into “cruel Adam” mode and say that his decision to swap out meds was the right one. Phyllis will think it would be natural if Adam had second thoughts after seeing his father weak and vulnerable.

Later, Nate Hastings (Sean Dominic) will examine Victor back at the ranch, but he’ll want to see Victor’s bloodwork before offering an opinion about what might have caused Victor’s symptoms. Even so, he won’t be able to rule out family stress as the cause. Nikki will announce that they’re going to skip The Grand Phoenix opening, and Victor will look sad and confused.

Things will continue to go downhill when Nikki mentions that the chef is going to make Victor’s favorite meal and Victor falters when he tries to remember what his favorite meal is. He’ll draw a blank and look very confused, but he’ll cover by saying he wants to dance with Nikki. They’ll slow dance, but Victor will stumble a bit and wind up going upstairs to lie down, leaving Nikki deeply concerned.

Meanwhile, Adam and Phyllis will make their way back to Adam’s penthouse, bickering about whether Adam really wants to see his father incapacitated. Phyllis will be clearly worried about the plan, and they’ll wind up betting on whether Adam will change his mind about double-dosing Victor. They’ll decide that if Phyllis wins, then Adam will have to end his vendetta against the Newman family. And Adam will say that he’ll think up a good wish for Phyllis in the event he wins. After Phyllis leaves, Adam will crumple a photo of Victor in frustration.

It’s interesting to see Adam as he’s conflicted about what he’s doing. But what’s his endgame here? His plan to incapacitate Victor and make him physically and mentally vulnerable is clearly starting to work, but then what does Adam have planned? Time will tell, but it seems that perhaps Adam hasn’t thought this through, which might be what Phyllis is picking up on, and it might just lead her to win her bet against Adam!

Next, on the new episode of Y&R on Monday, September 9, the Grand Phoenix opening will get underway and Abby Newman (Melissa Ordway) and Chelsea Lawson (Melissa Claire Egan) will

be over-the-top happy. There will be lots of photographs and grand entrances, and everyone will seem to be enjoying themselves and drinking either Abby’s specialty red cocktail, The Grand Sangria, or a drink in long-stemmed white glasses.

There will be a lot of smaller conversations throughout the night, but all heads will turn as Phyllis makes her grand entrance. She’ll walk in with a bunch of fanfare, then tell Chelsea and Abby that she’s there to congratulate them on their big achievement, and that they did better than she ever could. Later, her interest will be piqued when she overhears Devon Hamilton (Bryton James) tell Elena Dawson (Brytni Sarpy) that he thinks Chance Chancellor (John Driscoll) might be the person who is challenging Katherine Chancellor’s (Jeanne Cooper) will.

Finally, Zoe Hardisty (Anna Grace Barlow) will find her opportunity to cause chaos. As Y&R viewers will remember, she’s looking to cause trouble and cash in with a social media frenzy, since she’s trying to be an influencer. Throughout the evening she’ll eye the pitchers of Grand Sangrias, and when Theo Vanderway (Tyler Johnson) accidentally breaks a glass and causes a stir, Zoe will take the opportunity to lace the sangria pitchers with a white powder.