BY Heather Hughes on August 11, 2019 | Comments: one comment
Related : Soap Opera, Spoiler, Television, The Young and the Restless 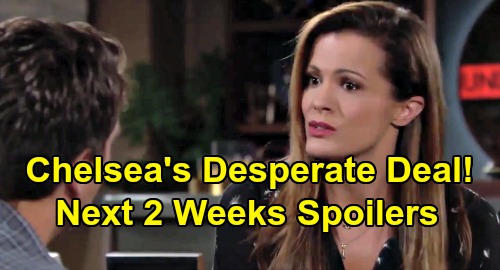 The Young and the Restless (Y&R) spoilers for the next two weeks tease that some surprises are in store. During the week of August 12-16, Lola Rosales (Sasha Calle) will get an unexpected letter from her father, Adrian Rosales. Once Lola fills Rey Rosales (Jordi Vilasuso) in on the note, it looks like she’ll open it and receive an invitation of some sort. Lola’s dad may want to meet up and apologize.

Y&R fans can expect Lola to avoid this invite, but she may still feel like this isn’t good news. At some point, Lola will have a freak-out during a chat with Mariah Copeland (Camryn Grimes) and Tessa Porter (Cait Fairbanks). She’ll feel like this is a bad sign. Lola will be convinced there’s some imminent disaster that could derail her nuptials – and Kyle Abbott (Michael Mealor) will fear the same thing.

Theo Vanderway’s (Tyler Johnson) ominous text will leave Kyle with concerns. In fact, Kyle will be so concerned that he has a freak-out of his own. However, he’ll get some advice from Traci Abbott (Beth Maitland) and Ashley Abbott (Eileen Davidson) before he ultimately calms down. Kyle will get past his nerves and tie the knot with Lola, but big trouble is still brewing.

That’s probably due to Zoe Hardisty (Anna Grace Barlow), a new character who will pop up soon. She may be the girl involved in this buried secret Kyle doesn’t want getting out. As for Summer Newman (Hunter King), she’ll find herself in a tight spot after she learns the truth. Summer will have to decide if Lola deserves to hear it or if she should preserve Kyle’s happiness by keeping quiet.

Other Young and the Restless spoilers say Chelsea Newman (Melissa Claire Egan) will face plenty of issues this week. She’ll dismiss Adam Newman’s (Mark Grossman) demand to have Connor at his place full-time, so a court battle may be brewing. Connor won’t be able to wrap his head around the situation, which means Chelsea will have to deal with the boy’s outrage.

Next, Daryl Tulane (Gordon Thomson) will play a role in some shocker for Chelsea. She’ll end up exposing a con of some sort, so Daryl’s claims about her inheritance may not have been as they seem. Over with Abby Newman (Melissa Ordway), she’ll spend some time opening up to her mom. Ashley will listen as Abby describes her latest problems, which will most likely revolve around her love life.

While Ashley offers advice, Rey and Sharon Newman (Sharon Case) will manage to patch things up. Of course, keeping Adam and Sharon apart may remain a challenge. During the week of August 19-23, Adam will move forward with a new plot. He’ll be retaliating after Victor Newman (Eric Braeden) scores a court order to keep him from visiting Christian Newman (Alex Wilson).

Over with Victor, he’ll try to watch out for Abby and her special interests. Could Victor have a man-to-man talk with Nate Hastings (Sean Dominic)? He may realize Nate turned the tables and is playing hard to get. Victor might contend that’s not the best path to love. Abby’s been burned far too many times for games, so Victor may think Nate should step up his game if he still wants her.

Back with Chelsea, The Young and the Restless spoilers say she’ll decide to make a deal. Will this have something to do with the scam exposure? If it puts Chelsea in a bind, she may have to reach a compromise with Adam. If not, Chelsea’s deal might involve someone who can help her take Adam on.

It sounds like some great episodes are on the way. We’ll give you updates as other Y&R details emerge. Stay tuned to the CBS soap and don’t forget to check CDL often for the latest Young and the Restless spoilers, updates and news.