The Young and the Restless Spoilers Next 2 Weeks: Sharon and Chelsea Go to War – Adam Betrayed – Abby and Nate Get Hot 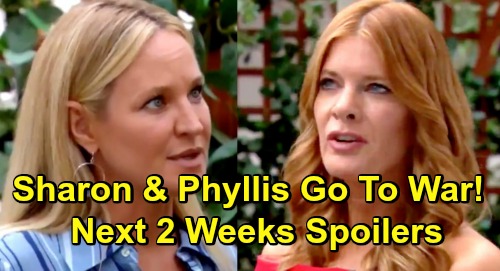 The Young and the Restless (Y&R) spoilers for the next two weeks tease that the drama will heat up in Genoa City. During the week of July 15-19, Lola Rosales (Sasha Calle) will fly off the handle. She’ll be furious when she discovers Celeste Rosales (Eva LaRue) is seeing her father again. Celeste will be all about forgiveness; she’ll even push Lola to let her dad walk her down the aisle like he wants.

Lola, on the other hand, won’t even view forgiveness as an option. She’ll refuse to even go through with the wedding if her dad dares to show his face. Meanwhile, Sharon Newman (Sharon Case) will explode at Adam Newman (Mark Grossman). After he follows her the park and tries to spend time with Christian Newman (Jude and Ozzy McGuigen), Sharon will feel ambushed and used.

Once Sharon makes it crystal clear that she’s done with Adam, Chelsea Newman (Melissa Claire Egan) will do the same. Adam will feel like he’s a better man with Chelsea, but she’ll insist he’ll have to find his way to that on his own. Chelsea won’t seem so sure Adam’s even capable of being a better man anymore.

Next, Cane Ashby (Daniel Goddard) and Traci Abbott (Beth Maitland) will grow closer. They’ll put on some old timey getups that look like the ones from Traci’s book. It seems they’ll share some laughs and get cozy thanks to that New York meetup they agreed to.

Other Young and the Restless spoilers say Abby Newman (Melissa Ordway) will find a hot distraction. She’s been worried about Victor Newman (Eric Braeden), but she’ll trust the doctor in more ways than one! Nate Hastings (Sean Dominic) is doing his best to take care of Victor, so Abby will let him take care of her, too. They’ll heat things up in a big way this week, so stay tuned.

Over with Phyllis Summers (Michelle Stafford), Y&R spoilers say she’ll hide her trail. Based on some comments Phyllis will make to Billy Abbott (Jason Thompson), it appears she’s got something up her sleeve when it comes to Adam. Michael Baldwin (Christian LeBlanc) and Kevin Fisher (Greg Rikaart) will also plot against the devious Newman, so Adam will have schemers coming at him from every angle.

In Paris, Ashley Abbott (Eileen Davidson) will enjoy a visit with Jack Abbott (Peter Bergman). He’ll eventually reveal why he flew all the way to see his sister, and the answer may involve preventing Jabot calamity. Could a merger between their two companies help them thwart Phyllis and any other threats? Regardless, Jack will make a choice that affects his family’s future.

During the week of July 22-26, Lauren Baldwin (Tracey E. Bregman) will feel like something’s up with Kevin. She may mention her suspicions to Michael, but that’ll probably just pile more on. Michael may struggle to hide his own involvement, but he’ll give it his best shot. He’ll remain determined to help Kevin break free from Adam’s grip.

Back with Nate and Abby, their spark will turn into a raging fire. The chemistry will ignite between them, so some steamy hookups should be brewing. Meanwhile, two Newman siblings will stand together. Nick Newman (Joshua Morrow) and Victoria Newman (Amelia Heinle) will make a good team as they prepare for more battles with Adam.

Speaking of battles, Sharon will have a fierce one with Chelsea. Who could blame her since Chelsea bashed her in the head and knocked her out cold before she left town? The Young and the Restless spoilers say Chelsea and Sharon will spar over some old issues as well as some new ones.

It sounds like the next two weeks will bring plenty of action. We’ll give you updates as other Y&R news comes in. Stick with the CBS soap and don’t forget to check CDL often for the latest Young and the Restless spoilers, updates and news.