The Young and the Restless Spoilers: Nick Convinced Newman Attacker Is A Man – Shocker Proves Him Wrong?

BY Sean O'Brien on February 5, 2019 | Comments: one comment
Related : Soap Opera, Spoiler, Television, The Young and the Restless 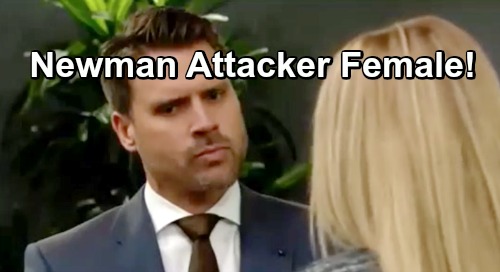 The Young and the Restless spoilers tease that Nick’s (Joshua Morrow) quip to Phyllis (Gina Tognoni) about the Newman’s attacker being a man smells like a red herring. So, who would be the most likely lady suspect that has, apparently, been tormenting Nikki (Melody Thomas Scott) and her coverup crew, framed Victor (Eric Braeden) for J.T.’s (Thad Luckinbill) murder, and was watching the Newman clan at the Ranch through an elaborate surveillance system that was embedded in the walls?

Phyllis must be mentioned as a first possibility. It’s always okay to list her as a suspect in various open criminal cases because she remains shady. Oh, Tognoni’s fresh face and new take on this character did polish the old Phyllis’ reputation for the past handful of years. But within the last turn of the calendar, she’s reverted to Michelle Stafford’s classic take on this lady and could easily be the villain in question.

Mackenzie (Kelly Kruger) has sporadically appeared in Genoa City within the last year. In so doing, she’s made herself a potential villain suspect.

Viewers may choose to believe that Mack’s animus for J.T. excludes her from being guilty. But her mind could have been bent if the mother of Mr. Hellstrom’s two youngest children happened upon the coverup crew information at some point since April. This is a stretch, but still plausible within the daytime world.

Victor wronged Estella Munoz (Anne Betancourt) ten years ago. Hardcore fans of Y&R recall that she took over for Miguel (Anthony Pena) as head of the Ranch staff. The Ranch was in it’s original form at the time.

Sharon (Sharon Case) purposely burned that structure down during a period when her mental health issues weren’t under control. A deep and surely highly controversial storyline stretch would have Sharon sporting a dual personality again. But instead of that speculation, let’s follow Estella’s possible revenge path.

Ashley (Eileen Davidson) suspected Estella of gaslighting her. Patty (Stacy Haiduk) was thought to be an alternative attacker at the time, but Adam (as then played by Michael Muhney) proved to be the person creating Sabrina’s (Raya Meddine) ghost.

Before learning that his son was to blame, Victor fired Estella. That wrongful job termination issue was left open and has never been resolved.

Estella wouldn’t know the layout of the newly built Ranch. But she could have made friends with, or be related to a current staff member who is helping her to carry out current payback efforts all these years later.

Patty’s name was referenced above. Since she’s often returned to GC to wreak havoc, Miss Williams also can’t be ruled out as the culprit. Though her motive for acting out in this way would need to be fully detailed.

Nick believes that some guy, maybe even a never-dead J.T. is causing trouble for his family. But what if Nick’s focus on men is misguided? CDL is a leading source for everything linked to The Young and the Restless. Check back regularly for Y&R spoilers and news!