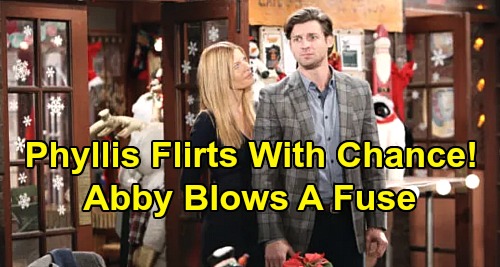 The Young and the Restless (Y&R) spoilers tease that Phyllis Summers (Michelle Stafford) will keep her options open and most likely infuriate Abby Newman (Melissa Ordway) in the process. Of course, Y&R fans know irritating Abby has become a favorite pastime of Phyllis’. She’ll be more than happy to do it again when she gets flirty with “Chance” Chancellor (Donny Boaz).

During the week of December 30-January 3, Phyllis will make her move. She’s been growing closer to Nick Newman (Joshua Morrow) lately and may not even be all that interested in Chance…yet. The idea of pushing Abby’s buttons will probably just be too tempting!

Phyllis’ interactions with Chance up to now have mostly been prickly. She knows a little more than he’d like about what went down in Vegas and has vowed to find out the whole story. However, Chance sees Phyllis has more of a nuisance than a threat. That’s especially true since Chance helped Abby fire her troublemaking partner at the Grand Phoenix.

In other words, Chance is feeling pretty large and in charge when it comes to Phyllis. He’s also feeling great about where his romance with Abby’s headed, but things could certainly change in the coming weeks. Hate-turns-to-love stories are incredibly common on soaps – especially when you’ve got two rivals vying for the same guy’s affection. All the ingredients are there for a soapy Abby-Chance-Phyllis love triangle.

Boaz tested with both Stafford and Ordway during the auditioning process, so it’s reasonable for the show to play around with both pairings and see which one works best. Phyllis would undoubtedly like to get revenge on Abby by swooping in and stealing her man! The Young and the Restless spoilers say Phyllis and Abby’s feud is far from over.

It’s also worth mentioning Phyllis will blab to Nick about Adam Newman’s (Mark Grossman) plan to win back Chelsea Lawson (Melissa Claire Egan). Nick will inevitably tell Chelsea, which could cause a “Chadam” reunion setback and push “Chick” closer for a while. That leaves the door open for Phyllis to bond with Chance in the meantime.