The Young and the Restless Spoilers: Phyllis Hot New Love Story – The Steamy Man of Her Dreams

BY Heather Hughes on August 18, 2019 | Comments: one comment
Related : Soap Opera, Spoiler, Television, The Young and the Restless 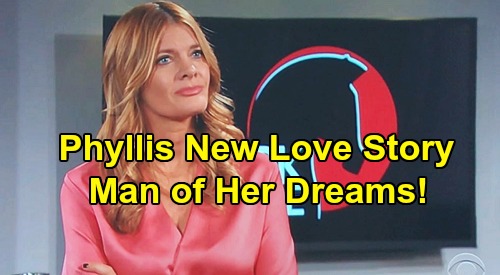 The Young and the Restless (Y&R) spoilers reveal that Phyllis Summers (Michelle Stafford) will continue to focus on what’s most important to her. Right now, that’s the Grand Phoenix and her daughter, Summer Newman (Hunter King). Phyllis has worked hard to make the hotel a success, so she’ll do whatever she has to do. She’ll score a stake in it and keep trying to find redemption in business.

As for Summer, Phyllis cares about her and wants to ensure her happiness. That’ll be tough to pull off since Summer’s still pining for Kyle Abbott (Michael Mealor). Phyllis will also grow increasingly concerned about Theo Vanderway (Tyler Johnson). She’s always been a bit wary of his involvement with Summer, so things will get worse thanks to Zoe Hardisty (Anna Grace Barlow).

Phyllis will put out plenty of fires and spark a few at the same time. She’ll meddle in other people’s affairs and perhaps do a little more scheming, but we have to ask…when will Phyllis find love again? Michelle Stafford has been back in the role for a while now. Maybe it’s time for Y&R to think about moving Phyllis into a new love story.

Of course, it was a crushing blow for many fans when Gina Tognoni was fired and forced to exit as Phyllis. Her version of the character was incredibly layered and complex. Stafford’s version has been written as a bit more one-note. Although it’s a good note, it feels like they sacrificed her depth to revert Phyllis back to who she used to be. A love story might allow Phyllis to reestablish some of that depth.

The question is: Who should Phyllis be paired up with? Tognoni’s Phyllis and Billy Abbott (Jason Thompson) had tons of chemistry, but Billy and Stafford’s version don’t seem like the right match. Some Young and the Restless fans think the show should let Phyllis and Adam Newman (Mark Grossman) hook up. There’s some sort of spark between them, but Adam’s already juggling enough women!

Despite Phyllis’ concerns about Theo Vanderway (Tyler Johnson), some viewers have wondered if the show might have them battle temptation and cave in. We sure hope not since it’d mean we’d be back at square one with Summer and Phyllis’ complicated relationship. Summer wouldn’t approve, so we’d have to endure more of their conflict. Since they’ve repaired the damage, it’d be better to let it ride.

Rey Rosales (Jordi Vilasuso) could be an option, but we’re not sure we’re feeling that either. There’s also Jack Abbott (Peter Bergman), but he seems ready to look forward, not back. Reviving classic “Phick” seems like Y&R’s best bet unless they want to bring on someone new.

Since Chelsea Newman (Melissa Claire Egan) will inevitably drift toward Adam anyway, Nick Newman (Joshua Morrow) should be headed for heartbreak. Maybe a reunion with Phyllis is just what Nick needs to press on!