BY Sean O'Brien on February 28, 2019 | Comments: one comment
Related : Soap Opera, Spoiler, Television, The Young and the Restless 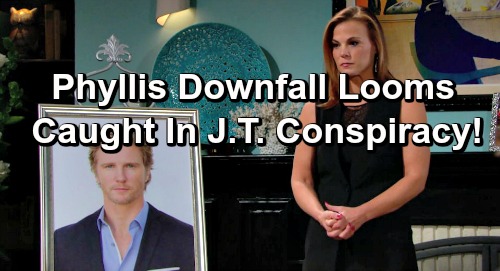 The Young and the Restless spoilers tease that Phyllis’ (Gina Tognoni) recent and stunning immunity deal does not prevent further charges being filed against her, the avoidance of a conviction, or serving jail time. Christine (Lauralee Bell) agreed to receive useful information in exchange for legal protection from current prosecution, but can she still pursue Phyllis for other crimes as they are revealed.

Few would have believed that Cricket, of all people, would use Phyllis as her star witness in this case. But Genoa City’s District Attorney had to. In exchange for compliance, including a lead that garnered digital video footage of J.T.’s (Thad Luckinbill) body-move, Mrs. Williams has shifted her gaze away from Phyllis.

Shock regarding J.T.’s zombie-like return was seized upon when Nick (Joshua Morrow) paid a talented artist to create a look-a-like mask. As Y&R fans know, Luckinbill actually returned to the set last year during Morrow’s mini-arc, where his character intended to gaslight Victor (Eric Braeden). Okay, so what does this have to do with Phyllis one might rightfully ask?

Everyone’s curiosity was again poked when Y&R recently posted a photo of Luckinbill, seemingly standing in-character as J.T. at the Crimson Lights set. So it could be that some similar type of storyline head fake is underway again. But who, among all characters, has the most intimate knowledge of doppelgangers? Ah yes, Phyllis.

Victor’s heinous hire of Marco (Peter Bergman in a dual role) left a permanent imprint on Phyllis’ soul. No one has forgotten that she was intent on pinning J.T.’s murder on Victor, a presumption which was sidelined in recent weeks due to the now coverup trio’s trial. However, that storyline sidestep doesn’t mean that Phyllis hasn’t continued to work dark.

The most believable outcome along these twisted lines would have Phyllis collaborating with a look-a-like, or if not that, then a second party who despises Victor as much as she does. Maybe Ian Ward (Ray Wise), or some such side character from the past.

But what if J.T. was rescued on that fated April night in 2018? Assume his mind was wrecked and Phyllis has been taking advantage of him ever since.

Well, at that point, her immunity deal could be compared to what the Fearsome Foursome shoveled on top of J.T.’s grave at Chancellor Park. Yes, it would be dirt, propelling new charges and the momentum for Christine to gleefully charge her nemesis and then convict.