BY Heather Hughes on June 28, 2019 | Comments: one comment
Related : Soap Opera, Spoiler, Television, The Young and the Restless 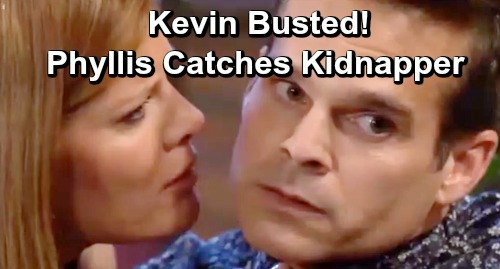 The Young and the Restless (Y&R) spoilers tease that Phyllis Summers (Michelle Stafford) will run into a problem. She’s normally a whiz with computers, but she’ll need some help with this particular issue. Phyllis will feel like Kevin Fisher (Greg Rikaart) is the perfect person to turn to. She’ll hand over her laptop, explain the trouble and count on Kevin to pitch in.

Naturally, Kevin will be uncomfortable with Phyllis’ request. He recently held Phyllis captive in a basement, so he won’t be eager to hang out with her. The less time Kevin spends with Phyllis, the better off he’ll be. However, Y&R fans know Phyllis is awfully pushy. She won’t take no for an answer, so Kevin will have to play it cool and try to assist her.

Phyllis currently believes Adam Newman’s (Mark Grossman) the one who held her hostage. It’s the whole reason she dashed off to Vegas and scored serious dirt. Kevin will hope he can avoid a truth bomb, but it looks like his signature cologne will give him away. The Young and the Restless spoilers say Phyllis will recognize the smell instantly and fly into a rage!

A recent Y&R preview video shows Phyllis wrapping her hands around Kevin’s neck. That may be in response to the whiff she takes. Phyllis was furious when she was suddenly snatched and stuck in that damp dungeon. She’ll definitely let Kevin have it, but her anger isn’t all he has to worry about.

After all, Phyllis could take her accusations to the cops. Kevin may argue that Phyllis has no proof, but she’ll probably suspect he doesn’t want the police digging around. The Young and the Restless viewers know Phyllis would be right about that. Kevin will grow fearful that Chloe Mitchell’s (Elizabeth Hendrickson) faked death will be discovered.

If that shocker gets out, poor little Bella Fisher (Cali May Kinder) could lose both her parents. Chloe and Kevin would both land behind bars. That’s why Kevin will do whatever he can to hide the real story. The Young and the Restless spoilers say Phyllis will want Kevin to admit he kidnapped her and divulge the reason why. She’ll rev up the pressure, which will leave Kevin spouting nervous lies.

Phyllis may call BS on Kevin’s claims, but she might decide they’d be better off as allies. Kevin’s move turned out to be a blessing in disguise anyway. If Kevin hadn’t gone after Phyllis, she wouldn’t have been enraged enough to seek dirt on Adam. Without her “Chance” Chancellor leverage, Phyllis probably wouldn’t be sitting in the Dark Horse CEO seat. The kidnapping worked out for her in the end.