The Young and the Restless Spoilers: Rey and Chelsea Hook Up After Shadam Reunion – Y&R Love Swap Brewing?

BY Heather Hughes on June 12, 2019 | Comments: one comment
Related : Soap Opera, Spoiler, Television, The Young and the Restless 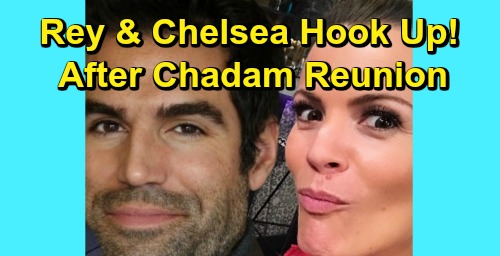 The Young and the Restless (Y&R) spoilers tease that Rey Rosales’ (Jordi Vilasuso) relationship with Sharon Newman (Sharon Case) could be on the verge of destruction. Rey has always been a bit wary of Adam Newman (Mark Grossman), but he tried to trust Sharon in the beginning. She assured Rey that she just wanted to help someone who once helped her a great deal.

However, it’s clear that there’s more to the story. Sharon’s connection to Adam is quite intense, and he obviously struck a nerve when he pressured her to admit she still felt something for him. Rey isn’t blind, so his jealousy is starting to rev up. There’s also a certain level of concern since Sharon seems to view Adam with rose-colored glasses.

It’s true that Sharon has admitted disappointment in Adam, and she doesn’t approve of how he’s handling the Christian Newman (Jude and Ozzy McGuigen) situation. There’s been some anger since Adam is letting Sharon down and even pushing her buttons.

Nevertheless, Sharon always seems to find ways to give Adam the benefit of the doubt and let him suck her back in. Rey can sense that it’s happening, so he’s fearful in more ways than one.

Of course, Y&R fans know Chelsea Newman (Melissa Claire Egan) is headed back to Genoa City pretty soon. She claims she remarried and that her new husband adopted Connor Newman (Gunner and Ryder Gadbois). Whether that’s true or not, Chelsea doesn’t want anything to do with Adam right now. That could change since she’s returning to town, but her initial reaction is telling.

Chelsea now seems afraid of Adam and his recent behavior may only confirm that she was right to trust her instincts. Y&R is writing a very different version of Adam than the one they wrote during his last stint. Will this Adam be able to make it work with Chelsea? More importantly, will Egan have the right chemistry with Grossman? It’s always tricky whenever you start putting recasts in the mix.

However, there seem to be some “Shadam” fans out there. Case and Grossman brought the heat during that steamy scene in Adam’s dream. The Young and the Restless could always pair Adam and Sharon up for a bit, but where would that leave Rey and Chelsea? Perhaps they could find themselves falling into bed together, too! It’d be fun just to test the waters and see what their chem was like.

Could Y&R be gearing up for a love interest swap, even if it’s a brief one? Could you get behind Rey and Chelsea hooking up? The Young and the Restless spoilers say some great material’s in the works. We’ll give you updates as other news comes in. Stay tuned to the CBS soap and don’t forget to check CDL often for the latest Young and the Restless spoilers, updates and news.